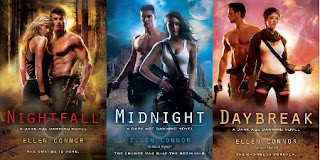 THEIR MISSION WAS TO SAVE THE WORLD. THEIR DESTINY WAS TO FALL IN LOVE.

It's been twelve years since the change, and Penelope Sheehan is one of the few still practicing magic for the good of humanity in this dark, dangerous world. Determined to infiltrate the notorious O'Malley organization, she poses as an abducted girl - until a a furious lion thwarts his mission. When the beast turns into a devastatingly handsome man, she recognizes in him the troubled boy she once knew.


Since becoming a skinwalker, Tru Daugherty has allowed his animal nature to take over. Aloof and cynical, he takes no interest in making the world a better place. He's a creature of instinct and impulse, living only to satisfy his senses - ignoring his scarred heart. He's also the best man to help her bring down the O'Malley crime ring.


Fighting alongside the last holdouts of humanity, they unleash a passion that tempts them to risk everything for love. But if they succeed, Tru and Pen hold the power to brighten the Dark Age for all time.


Daybreak is the third and final Dark Age Dawning book by the writing team known as Ellen Connor. This post-apocalyptic novel is edgy, gripping and a great end to a great series. Connor's vision of a world in which humanity is on the brink of extinction is edgy, and riveting. Readers will be swept away by the descriptive powers of the authors and glued to their seats by the pulse pounding action. It has action, it has love and it has shifters... need I say more?

Daybreak is a novel that can't easily be defined as paranormal romance or urban fantasy because it straddles the fence. There are elements of both genres present but I think overall paranormal romance may be a better fit. Though it is set in a post-apocalyptic world it is still a little lighter than most urban fantasy novels. I liked how closely it kept to that middle ground throughout and loved those moments where it strayed one direction or the other for a few minutes. It made the action a little more tense and the romance a little more intense and that was really nice.

Readers who have read the previous two books in this series will remember Penelope and Tru from their earlier days just after the change that left the world in chaos. Tru was a a misfit teenager and Pen was a mute child. It is amazing to see them again in the final book in the series, all grown up and having taken very different paths.

Tru has strayed closer and closer to losing himself in his lion form. He is basically withdrawing into himself, not caring about anything, not letting anything touch that part inside of him that can be hurt. In the beginning of Daybreak, he comes off as a real jerk, but love tends to change people and it certainly changes Tru. Pen on the other hand has taken a totally different path. She is one of the few who remain that uses her magic for the good of humanity instead of to it's detriment. She is known as "Orchid" a idol among the humans who has sacrificed to save them. She is light to Tru's darkness. They compliment each other so well. It's almost as if Pen is looking for someone to see her for something other than what's she's become, to realize who she was and is inside and Tru is that person.

Connor does an amazing job of shifting back and forth between the love that is growing between Tru and Pen to the action that's going on in their world. Pen is determined to take down the O'Malley crime ring, and she'll do it with or without Tru. I loved her determination and her guts. She wasn't a quitter. She didn't back down and when Tru would have resisted her efforts to save humanity he couldn't let her save it alone! They were such a great couple and this was the perfect way to end this series. Letting it come full circle in some ways. I think the authors had a vision from the beginning and they pulled it off with flying colors.

This one can be read as a stand alone but I think readers would miss out on so much of the back ground between the two main characters that it's a shame to do that. There are just some series' that work better read first to last and this is one of them. I loved the main couple. They sparkled on the page and their passion was electric. The action was fast paced and relentless, which leans on that urban fantasy line, but the romantic moments are the real focus of the book. I liked it a lot and thought it was a perfecting ending to the series. I recommend it to both paranormal romance fans and urban fantasy enthusiasts. It walks that fine line!


Daybreak is available NOW from your favorite bookseller.

Ann is a national bestselling author with a degree in English Literature; before she began writing full time, she was a clown, a clerk, a voice actress, and a savior of stray kittens, not necessarily in that order. She grew up in a yellow house across from a cornfield, but now she lives in sunny Mexico with her husband, children, two cats, and one very lazy dog. She likes all kinds of books, emo music, action movies and Dr. Who. She writes urban fantasy (the Corine Solomon series), romantic science fiction (the Jax series), apocalyptic paranormal romance (the Ellen Connor books), paranormal romantic suspense (as Ava Gray) for Penguin, and young adult fiction for Feiwel & Friends.

As a National Merit Scholar she attended Bowling Green State University in Ohio. She traveled to Norwich, England, for her junior year to study at the University of East Anglia, where she met her husband. After a brief stint as an unaccomplished art major, she graduated from BGSU with a BA in English and history. Ohio State University accepted her as a graduate teaching assistant. She earned her MA with a thesis on Old West outlaws and the impact of legend on society. In November of 2006, shortly after committing to a career writing fiction, she established Unusual Historicals, a multi-author blog for those writers and readers who love historical romances set in unusual times and places. She writes historical romance for Pocket books.

Together, they're a collaborative writing team. The pen name comes from two kick-butt female SF characters: Ellen Ripley (from Alien) and Sarah Connor (from The Terminator). When you put them together, you get Ellen Connor.
Posted by justpeachy36 at 12:00 PM