(Received for an honest review from Entangled Publishing)

Emma Jane Hellsbane always knew she was different, but she had no idea she wasn’t even human. Well, at least she’s half-human. She’s half-fallen angel, too, and now dear ol’ dad wants her dead. All the Fallen angels want all their troublesome offspring removed from the mortal coil so she’s trying not to take it personally. Besides, she wants him dead just as much. Her father’s death is the only way she’ll be forgiven for his sin, stop those pesky demons from trying to hack off her head, and have any hope at all of getting back to a normal life as a wicked slick Intuitive Consciousness Explorer.


Of course, first she’ll have to figure out which fallen angel is her father, avoid accidentally seducing her angelic mentor, help an old friend conquer his own fallen sperm donor, and basically save the world from a cataclysmic divine smack down.


No problem. With a last name like Hellsbane, Emma Jane was definitely born for the job.

Hellsbane is the first book in Paige Cuccaro's new Hellsbane series. It is billed as Urban Fantasy and has a touch of paranormal romance thrown in for good measure. As with any new series, I tend to look more at the potential than anything else. Cuccaro starts readers out with a great premise, an interesting heroine in Emma Jane, and a lot of possibilities for the future. Authors have a lot to establish in the first book a series and Cuccaro pulls it off with only a few setbacks.


Emma Jane Hellsbane thinks she's just a normal girl, with an interesting psychic ability, she can see emotion. She's turned into a career by telling people exactly what they want to hear, but she never imagined that it went any further than that. Cuccuaro quickly establishes the fact that Emma has always been different despite the fact that she considers herself average at best. She is unassuming and has an air of innocence about her that is compelling. There is a lot more explore with this character as readers progress through the book. She turns into quite the kick-ass heroine when she lifts her friends sword against a demon. That's where things kind of go off the rails with Emma.


Emma learns that she is a nephalim, the offspring of a human mother and fallen angel. When Emma picks up the sword she basically announces to the supernatural world that she is a soldier of the light. A warrior in the battle between the good guys, the angels and the bad guys, the demons who are minions so to speak of the real bad guys, the fallen angels. I know... slightly confusing, but very interesting. The only way Emma can be rid of her "assignment" is to kill the fallen angel responsible... her father. It has the making for a real Star Wars moment, where Emma has to decide if she can really kill her own father and I liked the overall premise. The sins of the fathers being revisited on their children. But I had a little trouble with some other aspects of the book.


Emma and her friend Tommy are both seeking to kill their fathers, a little morbid I must say. They are given a "trainer" so to speak, in Eli. Eli is an angel that is mentoring Emma in her task. But there is potential for some trouble. If for any reason Eli becomes attached or seduced by Emma, he will become one of the Fallen himself. He has had some problems in the past it seems, as he was mentor to Joan of Arc who almost made him take the plunge. And here lies my problem. The book takes on this vibe that perhaps Emma is sort of Joan incarnate, or reincarnated and I didn't see the appeal of this. I'm a die hard history fan and Joan of Arc is favorite of mine, but I thought Emma was already a great character, why go this direction with it... She didn't need the improvement. She needed to be established as a heroine in her own right, not to depend on the history of someone else.


There is a lot of potential in this series, and the first book establishes a lot of things. We get to see the heroine and what her back story is all about. Cuccaro successfully builds an interesting "world" for readers to read about. We get to see what's at stake for the characters and what they are trying to achieve. Emma gets a love interest, though not one that really has the potential to turn into more, because Eli is good and readers will want him to stay that way. There was a lot going on here and I think the overall appeal gets a little lost in the shuffle, which sometimes happens in a first book, there is just sooo much to be established.

I'm definitely giving this one a bit of grace. Basically because it didn't have enough romance in it to be considered paranormal romance and it lacked a little punch as far as an Urban Fantasy goes, but it's in there. The author just has to bring it out! There was definitely enough here to make me want to read the next installment. I hope the author puts a bit of a hold on the Joan of Arc thing, until Emma comes into her own a bit. She could be a great character given a little more free rein.

Hellsbane is available NOW from your favorite bookseller. 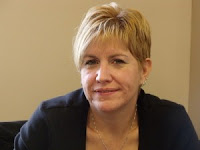 Writing was never a foregone conclusion for Paige Cuccaro. She once had dreams of being a psychologist, a pediatrician, a school teacher, a photojournalist, a bartender, and/or an EMT. And then she met her husband and her world came into focus. Being wife and mother are her highest priorities and greatest joy. But escaping to the fanciful, sexy worlds twirling through her mind is an absolute necessity. Putting those worlds, and the cornucopia of characters that people them, on paper is just plain fun.

Paige lives in Ohio, with her husband, three daughters, three dogs, three cats, a parakeet and a bearded dragon named Rexy, in an ever shrinking house. When she’s not writing she can be found doing the mom thing with a book in one hand and a notepad and pen in the other. Ideas come without warning and the best way to stimulate your imagination is to enjoy the imagination of someone else.
Posted by justpeachy36 at 12:30 PM