CoverArt: Click on the picture to see a larger, clearer picture of the covers in this series. 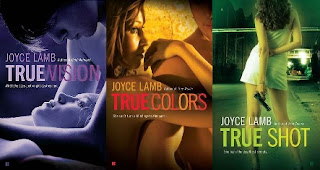 Special FBI operative Samantha Trudeau traps the most elusive criminals wither her unique psychic abilities. But the discovery that she's actually working for a ruthless rogue cell has left her badly injured, on the run and desperately struggling to remember everything about who she truly is. And the only man who can help her is anything but safe.

Journalist Mac Hunter knows what it's like to be at the mercy of shattered memories and wrenching loss. And as he and Sam race to piece together her shadowy past, he's irresistibly drawn to the honorable determined woman - despite the dangerous and fearfully intimate secrets that may be revealed.


But as Sam's powers tear at her sanity, a sadistic adversary is closing in. Her only chance of survival is a dangerous bond with Mac that will put their very future at stake...


True Shot is the final book in the True Trilogy which features the Trudeau sisters. Three women with psychic abilities that will keep readers riveted to the pages. This is romantic suspense with a paranormal twist. Joyce Lamb succeeds on just about every level with this one. It's crammed full of action but balanced with wit, and a great romantic connection. It's a true opposites attract story that will grab readers from the first page and take them for a whirlwind ride.


Admittedly this is my first Joyce Lamb book and I have to say I was really impressed. Though I had not read the first two books in the series, Lamb easily drew me in with a kick-ass heroine who finds herself falling for a normal, everyday guy. The references to the previous books were kept at a minimum as Lamb focused more on the relationship of the sisters versus what went on in their books.


Samantha Trudeau is a spy, who believed she was working for the FBI until her best friend is murdered. With her dying breath Zoe tells Sam that they have been working for a rogue group with not so good intentions. Samantha has always used her psychic abilities to bring down criminals but now everything she holds dear is called into question. When Sam is shot trying to get away from her former boss she finds herself in a desperate situation. Enter Mac Hunter, a stand up guy with problems of his own. The combination of these two characters is what really stood out about this book. Lamb takes the classic opposite attract scenario and infuses it with new life. What is more opposite then a female psychic spy and a newspaper journalist with an alcohol problem?


I loved the way Lamb shows Sam as such a powerful character, that commands respect and awe even in her weakened state. Her injury and the fact that removing the neuro-transmitter in her back, leave her wondering who she really is and what has happened to her. The one part that I was less than happy with was very minor considering all the good things about this book. I am not a fan of flash-back sequences and the return of Samantha memory hinged on them. I can take a few flash backs here and there, but I feel it too convenient for writers to rely on that technique. Give us a good back story that doesn't have to be played back like a movie. Lamb uses this technique in True Shot, but it doesn't overwhelm the story. I would have liked it better done a different way, but there was more than enough great points about this book to overshadow one fault.


What's not to like about Mac. He isn't a an alpha male character. He's just a normal guy, who has had some ups and downs in his life. He is on the straight and narrow path. He is honest, loyal and wants only to protect Samantha. It's hard to imagine the average joe protecting the hardened spy, but it really works in this book. The romance between is so unlikely that is takes on a mystical aura and the hot and steamy parts are all the better because of it. Though this book is all about action, Lamb throws in just the right amount of sizzling romance to keep romance readers as well as suspense fans happy.


I really enjoyed this one and recommend it to Urban Fantasy and Paranormal readers and even the thriller fans and romance buffs. There is truly something for just about everyone in True Shot. I'm sure once you read it you'll be running to the nearest book store for the first two books in the series... I already have them on order (wink)!

True Shot is available is NOW from your favorite bookseller. 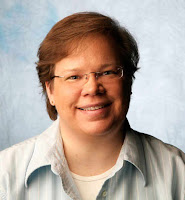 Joyce Lamb loves the beach, reading and tennis. When she's not killing off bad guys or working her day job as a journalist in the Washington, DC, area, you can find her vegging out in front of the TV while her two cats, Maddie and Allie, argue over whose turn it is to be in her lap.
Posted by justpeachy36 at 2:30 PM

Very nice review Debbie and I love the look of your blog. I've heard of the trilogy but haven't read it. Your review lets me know it's one I would enjoy. Thank you, Ma'am!

The only bad thing about visiting your blog is I end spending money on more books whenever I come here.

I enjoyed visiting your blog as well! I'm glad you stopped by, we'll have to compare Terry Spear bears after we both get them LOL...