Review: Dreaming of the Wolf 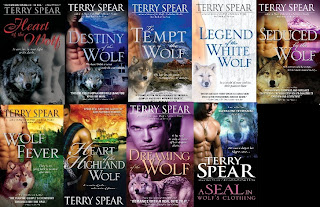 Excerpt from Dreaming of the Wolf (Use the Look Inside Feature)


Alicia Greiston is a no-nonsense bounty hunter determined to bring a ring of mobsters to justice. Her dogged pursuit of the crime family has forced her to avoid relationships - any man would only become a target for retribution. Luckily, Jake Silver is more than a man, and his instincts are telling him to stop at nothing to protect her.


However, the mob isn't entirely human either, and soon Alicia must flee for her life. When Alicia and Jake's passion begins to spill over into their dreams, Jake learns he will have to do more than defend her - he'll have to show his mate the way of the wolf.


Don't let the fact that Dreaming of the Wolf is book eight in a series deter you! Author Terry Spear does a wonderful job of making each of the novels in her Heart of the Wolf series stand on their own, as well as, a part of a series. Faithful readers of the series, will love the fact that one of the other Silver brothers is getting his own book and new readers won't feel left out at all, as Spear gives the right about of back story to keep the reader connected but not overwhelmed!

As many of my readers can attest, I am a shifter fan! My favorite paranormal characters are shape-shifters and werewolves in particular. That is due in part to my experiences with the Heart of the Wolf series. Terry Spear writes with a sense of direction. She wanted her werewolves to be as close to the majestic creatures of the wild as possible. Her research and love of the animal is obvious in her writing and her descriptions of pack dynamic's and wolf behavior is spot on! I am a huge fan of this series and Dreaming of the Wolf is one of my favorites.


Jake Silver was a minor character in other books from the Heart of the Wolf series, that always seemed to capture my interest. I was really happy that he got his own story. Jake is man of many talents. He is a nature photographer and one heck of an alpha male werewolf. He has never seen the need to take a mate and is comfortable with his life until he see's Alicia from a far. He is drawn to her and feels very protective, which is normal for a mated pair, but there's one problem... werewolves don't mate with humans! And therein lies the conflict.


Alicia is a strong character in her own right. She has one purpose in her life for now and no time for distractions. She is a bounty hunter on the trail of a group of mobsters who murdered her mother. She is a very determined woman. She is attracted to Jake, but she can't let that deter her from her goal. She's independent, sassy and not about to take a back seat role, even to an alpha male. The combination of these two characters is combustible! They heat up the pages from the love scenes to the stand-offs they have with each other. They were a very strong couple, that seemed to feed off each other. Definitely one of my favorite couples of this series!

Spear was able to take a fast paced plot that involved everything from mobsters to impossible relationships and turn it into a book that had a great deal of intimacy and romance. I liked the fact that the story is always the most important element, it's not just about hot romance scenes. They have their place, but they are not the focus. The focus in Terry's writing is always on the wolf pack and how everything relates back to family and pack. I love that about her writing and I think that is in essence what has made this series so entertaining and long lived. I can't wait to find out what happens next, there are so many good stories left to tell in Spear's werewolf world. If they are all written as well as this one, there will be a lot more to come!


I recommend this one to paranormal fans, romance lovers, nature enthusiasts and so many more types of readers. Don't let the number of the book hold you back. This is a series you have to read and Dreaming of the Wolf is one of my favorites of the entire series!


Check out Terry's interview for your chance to win one of two copies of Dreaming of the Wolf!


Dreaming of the Wolf is available NOW from your favorite bookseller.

Award-winning author and creator of award-winning teddy bears who have found homes all over the world including Australia, Switzerland, China, and Russia, and a retired officer of the US Army Reserves, I love to plant trees and flowers and if I could, I'd turn all the deserts green. Time travels are my favorite read, although I love to read most anything, and the Bourne series, Romancing the Stone, Sixth Sense, Legend, The Princess Bride, Stardust, Inkheart, LOTR, and tons of other movies are my favorites.

I love to research, to make urban fantasy worlds real, to bring a little of the paranormal into our world. Even in "Winning the Highlander's Heart" the heroine feels she is cursed and she has second sight. But I try to do it in a way that feels real, and not fantasized. :) Currently, I'm working on the first of the new jaguar shifter series, but still am working on wolf book number 11, 12 and 13! So more hunky wolves to come! Dreaming of the Wolf was just released! Book 8 in the series.
Posted by justpeachy36 at 12:00 PM

Hi Debbie! I just finished reading this book and I LOVED it!! I gave it 5 stars! Terry is one of the nicest authors I've met, and she even sent me a message after I reviewed it and thanked me for the review. What a classy lady! This was the first book of hers that I read, but I am definitely going to go back and read more! Thanks for the terrific review:)