Review: The Dragons of Chiril


(Received for an honest review from the LibraryThing Early Reviewers Program) 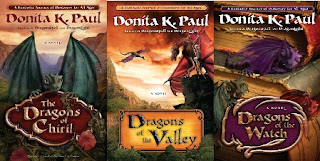 Excerpt from The Dragons of Chiril


Before Dragonspell, on a different continent and in a different time, a young emerlindians desperate decision threatens to disrupt the foundation of the world.


Tipper has been caring for her family's estate for years now, ever since her father disappeared, making a living selling off his famous artwork. Then she learns that three statues she sold were carved from an ancient foundation stone, and the fabric of her reality is crumbling.

She must free her father and save the world. But she can't do it alone.


Her ragtag band of adventurers includes Beccaroon, a giant parrot; Belamondore, an aristocratic young artist; a handsome dragonkeeper prince; the Wizard Fenworth; and the tumanhofer librarian, Librettowit. Together they travel through valleys and kingdoms and consort with purveyors of good and agents of evil to find and reunite the missing statues. Will they learn to rely on Wulder's grace and guidance along the way?


The Dragons of Chiril is the first book in Donita's K. Paul's, Chiril Chronicles series. This book was previously released under the title, The Vanishing Sculptor. It is appropriate for readers of all ages and will be of particular interest to those interested in Christian Fantasy. Paul blends her fictional dragon world, with Christian idea's and concepts to create a far reaching adventure quest, that shows the love of Christ in a very non-evasive way.


Paul's ability to craft novels that express Christian principles without beating the reader over the head with them is exceptional. By using a fantasy model she takes the religious undertones and subtly introduces them to the reader minus the preachy attitude and overbearing manner of some Christian fiction writers. I have always enjoyed Paul's work for that very reason. Her fantasy quests are similar to other good Christian Fantasy tales including, The Chronicles of Narnia and The Lord of the Rings. She gets her message across very well, even without all the bells and whistles.

Tipper is an interesting character. She has had to take on a great deal of responsibility since her father's disappearance. She has been caring for her family with money she earns from selling her father's art work. When she figures out that she has sold some very important statues that could bring about the destruction of the world if they are not reunited, she could have faltered and blamed herself, but she stands strong and starts out on an epic quest to get the statues back. I liked the fact that Paul gives Tipper's character a sense of innocence, but I found myself thinking she was much younger than she actually was.


This is an adventure story that is appropriate for all ages, but there are some difficult names to read and pronounce. I think probably readers from the ages of 10 - 15 will probably get the most enjoyment out of the book, but there are also adults who love Christian fantasy that will really get into it as well. The supporting cast was my favorite part of the book. Tipper's companions ranged from a dragonkeeper prince to a giant parrot and even included a wizard. There is a little something for everyone here. I liked how Paul incorporated Christian principles through the character of Wulder, and her use of humor in the dialogue between the wizard and the librarian.

If you are into Christian fantasy this is really a great read. The dragons are exceptional characters and I will definitely be reading other books in this series. It's a bit different and that's a good thing. I liked Paul's other dragon books and this one is just as well written.


The Dragons of Chiril is available NOW from your favorite bookseller. 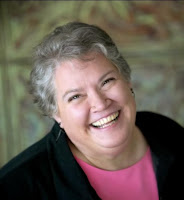 Donita K. Paul is the author of The Dragons of Chiril, Dragons of the Valley, and the bestselling DragonKeeper Chronicles with more than a quarter of a million books in print. She enjoys cooking, beading, stamping, knitting, and her grandsons. Not necessarily in that order.