(Received for an honest review from Sourcebooks Casablanca, via NetGalley) 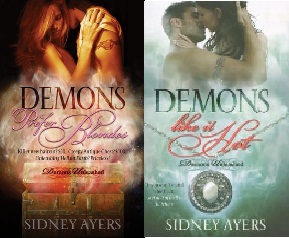 A RECIPE FOR DISASTER...

Matthias Ambrose is a demon mercenary who never took sides, until his attraction to the spunky caterer he was hired to kidnap leads him to almost botch a job for the first time in eight hundred years. Now he must protect her from his former clients, but even an ice—cold demon like Matthias struggles to resist her fiery charms.

OR THE PERFECT INGREDIENTS FOR PASSION...

Completely engrossed with planning menus and prepping recipes for her shot at cooking show fame, star caterer Serah SanGermano refuses to believe she's on a fast track to Hades. But how is she supposed to stick to the kitchen if she can't stand the heat of her gorgeous demonic bodyguard? As a wicked plot to destroy humanity unfolds and all hell breaks loose in Serah's kitchen, she and Matthias find themselves knee—deep in demons and up to their eyeballs in love...

Demons Like it Hot is the second book in the Demons Unleashed series by Sidney Ayers. Demons and foodies in the same book, what more could a romance fans ask for? Ayers' trademark wit and humor will have readers chuckling even as the action causes them to bite their nails. This series gives a new dimension to the demon mythos that paranormal fans are sure to love! And Serah's kitchen antics will have food-lovers licking their lips!


Demon's Like It Hot picks up the action directly after the first book in the series, Demon's Prefer Blondes. If the reader is just coming in on the second book, they are at a slight disadvantage. Ayers doesn't give very much back ground from the first book and readers will be left wondering about several details mentioned but not explained. After about the first hundred pages they should have it all sorted out, but I think that's a bit much to expect. So if possible, I suggest that readers, read Demon's Prefer Blondes first, just to get into the story and understand some of the relationships.


There were things I liked liked in this one and some things I didn't like as much. I wouldn't say that it's my favorite paranormal romance ever, but there were definitely moments of greatness. Ayers uses a kind of flippant style that was a little hard for me to get into. She infuses a lot of humor and wit into her writing which is fitting in a lot of situations, but i think I was expecting it to be a little bit darker or edgier since she was using demons as her paranormal character of choice. I think this type of book shows the differences between paranormal romance and urban fantasy rather well. Paranormal romances have a much lighter tone and once I understood what Ayers was going for, I began to really enjoy her voice.

Sarcasm is one of my favorite uses of humor and Ayers used it perfectly with Serah, the heroine! She had a very dry sense of humor that appealed to me. Serah was a character that was not good with change and her whole world is kind of in an upheaval in this book. I liked that Ayers was able to get across to the reader that Serah is a strong woman, yet she has her own vulnerabilities. She was a little wishy-washy where Matthias was concerned, but once she finally got her head in the game, she was all in.


Matthias was a dark brooding hero and that's my favorite kind. He has a bit of a dark past, as a mercenary-for-hire, getting ever so close to that line of no return, but not quite stepping over it. Now, he's turned over a new leaf but the man he was is still plaguing him. He and Serah have a checkered past that only he is aware of. Ayers really hit the nail on the head with this character. He was attractive, a little out of place and very determined. But I think he was little too worried about Serah's opinion of what he'd done. I think it was obvious from the details of Matthias' past that she would have understood his actions, so I felt it was a little unnecessary to hinge most of the book on the fact that she would never forgive him. That would have made Serah's character very shallow and that she was not.


The stroke of greatness that I found in this book and the series is Ayers take on the demon mythos. I loved it! Her demons are divided into two groups, the good guys, the Paladians and the bad guys, the Infernati. That allows Ayers to show demons in a different light that they are normally seen. Some of her demons are good, just as some angels are bad. The Fore-Demon council was  little hard to understand at first, but I think reading the first book would have fixed it in my head a little better. I loved the idea of demon travel and the pernagrans being full of ice and cold and snow, certainly not what I would expect. I was thinking smoke and fire, so that was interesting as well. It always amazing to me how an author can take something that readers think they know something about and turn it on it's head. This was very original and refreshing. And the Serah's cat was the bomb... LOL! He was my other favorite part of the book, a Scottish cat (imp) who drinks scotch and smokes cigars. What a hoot!


It's a good thing this is a series though, because though the ending was satisfying, it certainly left a lot of questions. There were several story line's that were left hanging and there was a general sense of closure that wasn't really achieved. I almost felt like the author needed one more chapter to wrap it up a little better. I don't always get the opportunity to read an entire series straight through and I guess I'm used to each book being a little more self-contained, but like a good tv series, if you leave some questions as to what happens next you'll draw your audience back. So, I'm not too sure that's a bad thing. I'm definitely up for reading the next installment in the series. I want to see more of Kalli and Daniel.

Demons Like it Hot is available NOW from your favorite bookseller.