Review: How to Worship a Goddess


CoverArt: Please click on the picture for a larger, clearer image of the books in this series. 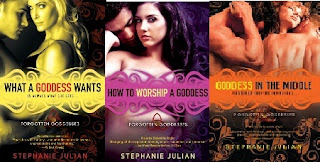 Excerpt from How to Worship a Goddess (WARNING: This excerpt is not appropriate for readers under eighteen-years-of-age.)


HE'S EXACTLY WHAT SHE'S ALWAYS WANTED. AND SHE UNLEASHES HIM LIKE A FORCE OF NATURE...


Lucy was once the beloved Goddess of the Moon, and she could have any man she wanted. But these days the goddesses of the Etruscan pantheon are all but forgotten. The only rituals she enjoys now are the local hockey games, where one ferociously handsome player still inflames her divine blood...


Brandon Stevenson is one hundred percent focused on the game, until he looks up and sees a celestial beauty sitting in the third row. A man could surely fall hard for a distraction like that...


Stephanie Julian's second book in the Forgotten Goddesses series, How to Worship a Goddess is both smoking hot and achingly tender! The Forgotten Goddesses series is a spin-off from Julian's earlier Lucani Lovers series and fans of her work will love getting back into the Lucani world. This was my first experience with it and I found it fascinating. Julian's world building skills are at full strength in this novel, as she allows readers to see into the Lucani world through the eyes of an outsider, who wants nothing more than to protect his goddess.

First and foremost this book is centered on the intense and passionate relationship that develops between the two main characters, Lucy, Etruscan Goddess of the Moon and Brandon, a local hockey-player, with a few secrets of his own. Julian is able to balance steamy sex scenes with heartfelt emotion. The sex was hot enough to set the pages on fire, but the way these two characters feel for each other is just as unforgettable. I liked the way Julian's characters complimented each other's strengths and weaknesses. Lucy and Brandon made a wonderful couple that readers will want to know more about.

I was also very interested in Lucy's back story. The Lucani world was interesting and unique. I enjoyed the way that Julian brought out more and more details about their society and customs as the story went on. Brandon's introduction into Lucy's life allowed the perfect opening for the information and the flow was natural and unforced. Julian does a fantastic job of weaving the story line around so many outside details. The element of having a professional athlete as a mate to a Goddess was an interesting take as well. I thought the whole book was refreshingly different.

Lucy was the perfect opposite of the heroine in the first book in the series, who was the Goddess of the Sun. She was sultry and mysterious yet she was also a real person. I single mom, providing for her children by running a bar. She had enough realistic qualities to draw the reader in and hold them. Brandon was the typical hunky athlete, who possessed a somewhat less than worshipful attitude. He wanted Lucy and he was going to get her, demons be darned, LOL. But I have to admit I liked his take charge attitude and the way he accepts Lucy for exactly who she is. Julian does an excellent job with these two characters and I hope to see them again in future installments of the series.

Check out Stephanie's Guest Post for your chance to win a copy of How to Worship a Goddess!

How to Worship a Goddess is available NOW from your favorite bookseller.