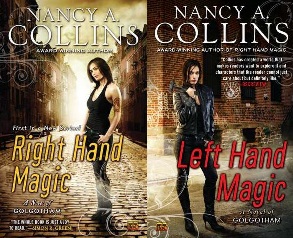 Excerpt from Nancy A. Collins


Located on Manhattan's Lower East Side, Golgotham has been the city's supernatural ghetto for centuries. Populated by countless creatures from myth and legend. It's most prominent citizens are the Kymera, a race of witches who maintain an uneasy truce with New York City's humans...


Tate Eresby has accepted the unusual sights and sounds of Golgotham and has made it her home. Unfortunately, trend-setting hipsters have descended upon the community - along with an anti-Kymera faction known as the Sons of Adam. The sudden influx of tourists escalates racial tensions to a boiling point when two Kymerans are attacked, another is murdered, and rioting fills the streets.


Tate's relationship with Hexe, the current heir to the Kymeran throne, is also full of tension. Hexe's uncle Esau is an anti-human activist who's ready to declare war on the Sons of Adam - and who believes Tate is a spy. But is it possible that Tate's time in Golgotham has left her more than human?


Left Hand Magic is the second novel in Nancy A. Collins' Golgotham series. Collins tackles some heavy themes including racial tension and mixed species relationships in her follow up to Right Hand Magic. The incredibly complex neighborhood of Golgotham is peopled with paranorms of all shapes and sizes and metal artist Tate Eresby is one of the few human residents. Collins' ability to bring her setting and characters to life, makes this novel an Urban Fantasy lovers dream!


In the first book in this series, Right Hand Magic, Nancy A. Collins brought her supernatural world into stark focus. She established Golgotham, giving readers a very unique and refreshing take on it's paranormal inhabitants. Somewhat reminiscent of Kim Harrison's "Hollows," Golgotham is a neighborhood that harbors the strange and unusual. The werewolves, vampires, centaurs and other creatures of myth and legend and one very interesting human, Tate Eresby. Collin's also gave readers a heroine that is both sassy and unassuming. Tate's relationship with the Kymeran prince, Hexe, a sorcerer that refuses to use left hand magic, dark magic filled with curses and black sorcery, is passionate and showed a huge amount of potential.

The first book in the series, rocked and I had high expectations for book two, Left Hand Magic. I was anything but disappointed! Collin's once again comes through with a remarkable novel that parallels racial struggles and prejudice that still exists in our own corner of the world. There are basically two factions, The Sons of Adam who are determined to rid Manhattan of supernaturals and a group led by Hexe's uncle that is against any kind of mixed species relationship, including Hexe's relationship with Tate. To make matters worse, people working in one of Tate's projects are turning up dead and she is the number one suspect. I liked the fact that Collins gave readers two separate points of conflict with both the racial tensions and the mystery involving the murdered Kymeran's.

The shining star in this series is really Collins' world building skills. Golgotham is very well fleshed out and unique. Collins' take on Golgotham's paranormal inhabitants isn't what most readers would expect. She is able to bring her characters to life in such a way that the setting is almost a character itself. I was basically unfamiliar with what Kymera were and I found them very interesting. The idea with the two different types of magic was interesting too. Right hand magic being what many would call "white" magic and left hand magic being "black". It was just an interesting take, that I felt many Urban Fantasy readers would like.


I also really like Hexe. He is very mysterious and gives off a very commanding air, yet he isn't pretentious or overbearing. He's a warlock prince. He could be stuck up and selfish, but I'm glad Collin's chose to go in a different direction with him. His family including his Uncle Easu add to the conflict of the story. Tate's parents expected her to marry within her station and so did Hexe's family. When they fell in love and decided to go a different direction, Hexe's family took great offense and are not shy about showing it. I like the way that Collin's gives readers just enough back story to keep it interesting, but not giving too much away, to quickly, either.

This is a great series! I am definitely recommending it to my Urban Fantasy readers. And those of you are into reading paranormal romance should start giving some of these Urban Fantasy picks a try. I know Urban Fantasy tends to be a little darker than you might be used to, but I really think if you tried it you'd really like it. Go outside the box! Take a risk! This is a good series to do that with.... you won't be disappointed!


Left Hand Magic is available NOW from your favorite bookseller. 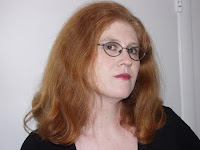 Nancy A. Collins has authored more than fifteen novels and numerous short stories, and she served as a writer for DC comics' Swamp Thing for two years. A recipient of the HWA's Stoker Award and the British Fantasy Society Award, she has been nominated for the Eisner, John Campbell Memorial, World Fantasy, and international Horror Guild awards. Collins is best known for her groundbreaking vampire character Sonja Blue. Her works include, Sunglasses After Dark, her Southern Gothic collection, Knuckles and Tales, and the Vamps series for young adults. She currently resides in the Cape Fear area of North Carolina with her fiance, Tommy, and their Boston Terrier, Chopper.
Posted by justpeachy36 at 11:00 AM

Thanks for the wonderful review! If you're interested in seeing a little bit more about the Strangest Neighborhood in the Big Apple, the GoBOO (Golgotham Business Owners Organization) has a website for tourists and other visitors at www.golgothamonline.com