Please join me in welcoming Elisabeth Naughton to Debbie's Book Bag today. Elisabeth is here promoting her latest book in the Eternal Guardians series, Enraptured. The publisher is sponsoring a giveaway for two copies of Elisbeth's book, see details at the end of the post.


Thanks so much to Debbie’s Book Bag for inviting me to stop by during the release of ENRAPTURED! ENRAPTURED is the fourth book in my Eternal Guardians series, recently garnered a starred review from Publisher’s Weekly and was named a Top Ten Romance for Spring 2012.


For those who are new to the series, the Eternal Guardians are seven warriors descended from the seven strongest heroes in all of ancient Greece. They defend both their world—Argolea—and the human realm from threats born of the Underworld—specifically, one evil goddess by the name of Atalanta who was herself once a hero but who made a deal with Hades for immortality and the chance to command an army of daemons for a shot at revenge.


One question I get asked over and over is “How did you come up with the idea for the series?” It’s actually not an easy question to answer because my brain is not an easy thing to explain, but the root idea came when I was researching my debut book, STOLEN FURY, which was a treasure hunt romantic suspense where the main characters are searching for relics of the Three Furies from Greek mythology. I’d always loved the ancient myths in school but didn’t know I wanted to write something linked to them until I immersed myself in the research for that book. Slowly, a book idea came to mind, but I still didn’t know how I was going to take that idea (which turned out to be MARKED, book one in the Eternal Guardians series) and link it to the myths. And then one day I was reading a blog an author had written asking readers what type of paranormal character they’d like to read more about. A reader commented that she’d like someone to write about the heroes from Greek mythology – Heracles, Odysseus, Jason, Perseus, etc. And suddenly everything clicked in my (often) scattered brain.


I don’t write about the actual heroes from Greek mythology. That would take me back in history and I’m not a historical author. My heroes are descendants of those great heroes though, and they live in a realm established just for them and their offspring by Zeus, created beyond the mortal world but outside Olympus. And the descendants of the seven strongest heroes are the warriors of their world—the ones tasked with protecting not only their realm, but the human world as well. Just as the ancient heroes protected mankind.


The fun part about this series is taking the ancient myths and twisting them around. I try to stay true to the myths when I can, and some of the traits the original heroes had, my descendants have as well, but I also take liberties (as a good author should!). But at the end of the day, if you’re a Greek mythology buff you’ll definitely see parallels in my work between those ancient myths and the stories I’ve created.


To celebrate the release of ENRAPTURED, Sourcebooks is giving away two copies of the book. Just tell me what your favorite Greek myth is to be entered in the drawing! 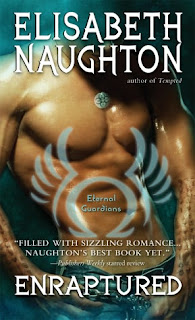 The publisher is sponsoring a giveaway for two copies of Enraptured by Elisabeth Naughton.

~ You must be a GFC follower or an E-mail subscriber to participate.
~ US and Canadian Addresse only.
~ The deadline to enter this giveaway is Midnight EST May 1st.

1. Please answer Elisabeth's question at the end of her post for a chance to win!
2. Please fill out the FORM.
Posted by justpeachy36 at 9:30 AM

I like the story of Apollo and Cassandra. He fell in love with her instantly, he wanted to kiss her. In return she wanted a gift, he gave her prophecy. He kissed her, she saw in his mind that he was going to take over Troy. She spit in his face. He was furious but could not take his gift away. She was forced to see the future and no one believed her when he when she forsaw the Trojan horse idea. There are other great myths, but that is a great one.
This book looks great and would love to win and read. Thanks for the giveaway.
christinebails@yahoo.com

I like the story of Icarus, who made wings out of wax. despite warnings from his father Daedalus, he flew too close to the sun while trying to escape King Minos, and his winds melted. He fell to his death.
This book sounds amazing. Would love to read it.
Thanks for the giveaway.

I have always been a fan of Pegasus. This might beautiful winged horse, helps the hero but the hero is stupid enough to fall off his back. Pegasus can't help it if he is just too amazing to be ridden for long!
I love how your books take ideas from Greek mythology, but you make it your own.
I can't wait for your newest book!

I love Pegasus, Persus, Thanks for the awesome giveaway. Tore923@aol.com

I like Hercules and watching the weekly series on TV with Kevin Sorbo as Hercules. Thanks for the chance to win.
luvfuzzzeeefaces at yahoo dot com

I've been hearing a lot of good things about this book and what gorgeous covers!

I have just started this series and am loving it!

I really don't know much about the Greek myths, just what I've seen in movies & TV shows. I did like the story of Jason & the Argonauts - was that a Greek myth?
sallans d at yahoo dot com

I've read the first story in the series and am reading the second now. I love this series!!!

I like the one with Theseus and the minotaur.

I cannot wait for Enraptured. Love this series. My favorite is Hercules, the mighty Alpha Warrior and Medusa. Thanks for the great giveaway. GFC name is Lucky47. Email subscriber.
Carol L.
Lucky4750 (at) aol (dot) com

I like Hercules, also because of the TV show; I haven't read a lot of books related to Greek mythology.

Love this series, thanks for the giveaway.

I love the myth of Persephone and Hades.

Thanks for the chance to win Enraptured!