Reveiw and Giveaway: Dread On Arrival

(Received for an honest review from Berkley Prime Crime ) 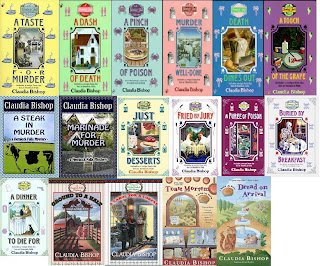 Excerpt from Dread on Arrival courtesy of Amazon's Inside Look Feature

The host of the television show Your Ancestor's Attic and the producer of it's competition, Pawn-O-Rama couldn't be more different. Ancestor's Edmund Tree is a mean spirited, snobbish Brit, while Pawn's Belter Barcini is a T-shirted, armpit-scratching thug. Their already bitter rivalry heats up when they come to Hemlock Falls to have it out in a cooking contest in the elegant test kitchen of Bonne Goute Culinary Academy.

When one of the men keels over on camera-- the victim of fatally spiked punch-- all eyes turn to his television nemesis as the obvious culprit. But the list of suspects is long and includes some of Hemlock Falls' residents. Luckily, inn owners Sarah and Meg Quilliam are experts at appraising motives for murder...

Dread on Arrival is the seventeenth book in the Hemlock Falls series by Claudia Bishop. Readers who are familiar with the Quilliam sisters will love this installment, with is Antique's Roadshow feel and quirky set of characters. Bishop's long running series is a favorite of cozy readers and continues to bring new and exciting adventures to the table. Sarah may have promised her husband she would stop 'snooping' but when murder amongst antiques rivals appears, what's a girl to do?


There were things about this installment in the Hemlock Falls series that I liked and a couple of things that didn't quite gel as well as Bishops books usually do. I liked the whole rival TV host scenario. Antiquing has become a very popular pastime and I thought it was a very current topic with shows like American Picker's and Pawn Stars seeing such a growing following. Bishop's descriptions of the rivalry between the two hosts was interesting and almost jovial. The characters Bishop creates are always eccentric and quirky and full of fun. They always make me smile even thought the subject is murder.


One of the things that I didn't quite understand was why these two antique show hosts decided to settle their differences with a cook off? I realize that Hemlock Falls is known for it's cooking school and the tie in is there, but I think it was a weak one. I think there would have perhaps been other scenarios that would have worked better. Something was more related to what these men did in their careers, something that tied-in to antique dealing and finding hidden gems that people don't even know they have. There was a lot of potential with this theme, that just didn't seem to be realized.


Once I got past that issue I did enjoy the book. Bishops Quilliam sisters are among my favorite amateur sleuths. Sarah is forever promising to keep her nose out of the mysterious happenings but she is also forever getting around it with help of Meg and the other regulars at the Hemlock Falls inn. The characters are so well developed in this series, since we've had seventeen books to get to know them, but Bishop is always creating new and different things for the reader to find out about their favorites. Bishops strength is truly in her character development.


There were plenty of suspects in this one, even some members of Meg's staff. The motives were interesting and worked well with the story. The mystery aspects of the story moved well and the pacing was perfect. I didn't figure it out all the way until very close to the end. I had my suspicions but I couldn't nail it down. This is a great series that readers won't want to miss. Each book can be read as a stand alone, but together they are a wonderful addition to any readers personal library!

Dread On Arrival is available NOW from your favorite bookseller.

Claudia Bishop(Mary Stanton) has been writing professionally most of her adult life. She divides her time between a goat farm in upstate New York near the Finger Lakes region and a small home in West Palm Beach.
Stanton is the oldest daughter of William Bishop Whitaker and Caroline Whitaker, both of whom were college professors for parts of their careers. She has two sisters; Cynthia Bishop Whitaker, Esquire of Seattle, Washington and Deborah Susan Whitaker Hairston of Ithaca, New York. She was born in Winter Park, Florida while her father was Dean of Men at Rollins College. When William Whitaker was recruited back into the Navy in the early fifties, he and his family were posted to Japan. Leaving active Naval service for the Reserves and a position in the State Department, Whitaker was posted to Hawaii where he occupied a position as Director of Educational Services for Southeast Asia.

The publisher is sponsoring a giveaway of one copy of Dread on Arrival by Claudia Bishop.

~You must be a GFC follow or an E-mail subscriber to participate.
~U.S. addresses only.
~Deadline to enter this giveaway is Midnight EST May 8th.

I'd love to read this book
GloriaDeal@aol.com

I don't know how I missed this series, but I always love trying out new cozies! Thanks. kuzlin@aol.com

This sounds like a wonderful read as I love Antique Roadshow, American Pickers and Pawn Stars!
kpbarnett1941[at]aol.com

I have not read any of this series. I must get busy.

Love the cat on the book cover---it just says cozy to me.
suefarrell.farrell@gmai.com

I just bought a lot of cozies at Library book sale but I would not mind adding this one to my reading list.

Another new to me author, which I love finding!! This sounds like a fun book, can't wait to read it.

I have never seen this series before, wonder how that happened. I do love quirky characters so I am interested in reading this book.

thanks for introducing me to this series!

I love your writing and have for a while now. I think I have read everything you have written!

I haven't read any of this series but I guess I could start here. I never start at the beginning anyway.

This sounds like a great series! I'd love to start with this book!