Review and Giveaway: The Scarlet Pepper 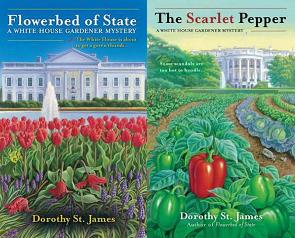 Excerpt from The Scarlet Pepper courtesy of Amazon's Inside Look feature

As the official organic gardener for the White House, Casey Calhoun is usually up to her elbows in something or other. But when someone starts tampering with the Presidential vegetable garden, she soon finds herself in way over her head.

As if it wasn't bad enough that red peppers are growing instead of green ones and cabbage is popping up where the First Lady's favorite lettuce should be - a hard-nosed investigative reporter is found dead after targeting the President's unpopular Chief of Staff.

Raking over the clues and rumors, Casey knows that someone is sabotaging both her garden and the First Lady's reputation. But when she has one close call too many, Casey realizes that the next thing buried in the dirt might just be her…

Just in time for the gardening season, Dorothy St. James releases her second book in the White House Gardner series, The Scarlet Pepper. This cozy mystery features the First Lady's Kitchen Garden and some interesting organic gardening ideas. Add to that some re-arranged veggies and a dead body and you've got a great whodunit! Readers will love St. James' smooth writing style and personable characters. St James gives the first lady, attitude and personality. A great sophomore addition to a great cozy series!


Coming from a family that loves to garden every year, I knew I would enjoy this series. Dorothy St. James takes things a step further and sets her garden in the high octane atmosphere of politics and secret service. I loved the whole idea of having the protagonist in this one be the White House gardener. We hear so much about different aspects of the presidency and the things that surround the White House, but we don't often see behind the scenes. I liked the fact that St. James wanted to take little seen members of the White House staff and explore where she could take them in this series.


Casey is a great heroine. She isn't one to go looking for trouble. She minds her own business and keeps her head in her garden. But when trouble finds her, she doesn't back down. She takes everything in stride, even criticism and I thought that made her a very unique and engaging character. When things start to go topsy-turvy in the White House garden, I think Casey thought she was ferreting out a prankster, not a murderer. But when a pesky reporter ends up dead after a confrontation with her, she doesn't have a choice but to investigate. I liked the fact that St. James gave her a reasonable excuse to look into things and her methods were anything but typical.


One of the parts of this book that I thought was interesting was the fact that though the first lady isn't the primary source of the action in the book, she still plays a vital part and has a great sense of presence and attitude. I liked the fact that St. James made her seem like a real person. Someone who was totally befuddled when the wrong vegetables started showing up in the wrong parts of the garden. I got a good laugh out of that, because it was just like to press to focus on something inconsequential instead of the more important issues at hand.


This is a great addition to the series and I can't wait to see what Casey gets into next. I thought St. James created a very believable atmosphere to a well renowned and iconic place. She was able to make the White House seem approachable and real. I loved the characters and hope to see more than a hint of romance in the next book. She's leading up to it! I also enjoyed the suspects and the motives in this one. And the veggie mix-ups were humorous and added to the flavor of the book. Don't miss this one... it's a great series and a great book!

The Scarlet Pepper is available NOW from your favorite bookseller.

Mystery author Dorothy St. James was born in New York but raised in South Carolina. She makes her home on an artsy island community in South Carolina with her husband, two crazy dogs, and fluffy cat. Though writing has always been a passion for her, she pursued an undergraduate degree in Wildlife Biology and a graduate degree in Public Administration and Urban Planning. She put her educational experience to use, having worked in all branches and all levels of government including local, regional, state, and federal. She even spent time during college working for a non-profit environmental watchdog organization.

Switching from government service and community planning to fiction writing wasn't as big of a change as some might think. Her government work was all about the stories of the people and the places where they live. As an urban planner, Dorothy loved telling the stories of the people she met. And from that, her desire to tell the tales that were so alive in her heart grew until she could not ignore it any longer. In 2001, she took a leap of faith and pursued her dream of writing fiction full-time.

The publisher is sponsoring a giveaway of one copy of The Scarlet Pepper by Dorothy St. James

~You must be a GFC follow or an E-mail subscriber to participate.
~U.S. addresses only.
~Deadline to enter this giveaway is Midnight EST May 7th .

Thank you for this great review, sounds like a good cozy.

I love to garden, this book really appeals to me.
Theresa n
weceno(at)yahoo(dot)com

I thoroughly enjoyed FLOWERBED OF STATE and am looking forward to the next book in this delightful series!
kpbarnett1941[at]aol.com

I have this series on my wishlist!

I can't get enough of fun things associated with politics in this election cycle---so I really want to read this book.
suefarrell.farrell@gmail.com

after reading the 1st book in the series, i cannot wait to read The Scarlet Pepper.........
thank you for the giveaway!!!

I love gardening so I took notice of this cozy right away!

I read another series that takes place at the White House and I love the idea of it (and I love gardening). I've never seen this series, so I'm definitely going to have to check it out.

I would love to read this series! It sounds good!