Review and Giveaway: Home For A Spell

Home For A Spell (Bewitching - Book 7) By Madelyn Alt

Back to work at her antique shop, Enchantments, Maggie's broken leg makes helping customers a lame proposition-but that doesn't mean the rest of her life is slowing down. While her boyfriend, the magically- inclined Marcus, has some unfinished business to attend to and her best friend is getting ready to tie the knot and move away, Maggie decides it's time to find her own change of scenery. And she'll start by finally getting a new apartment.

But Maggie's new dream home turns into a nightmare when the apartment manager is found dead before she can even sign the lease. And Maggie finds herself not only searching for a new home-but for a frightfully clever killer...

Madelyn Alt returns with the seventh book in the Bewitching cozy mystery series. Home for a Spell continues the tale of Stony Mill, Indiana, a mid-western town that is suddenly full mysterious magical energy. Alt's offbeat and interesting characters are up to their eyeballs in murder and in for quite a ride as they try to figure out who killed the apartment complex manager in this enchanting cozy.


Maggie, Maggie, Maggie! That's all I can say. Once again our heroine finds herself in the wrong place at the wrong time. With a broken ankle no less. This book picks up where A Witch in Time left off and Maggie is still suffering the effects of the things that happened in that book. Book six fell slightly short for me and I was hoping that Home for a Spell would renew the energy of the series. One of the things that is so wonderful about this series is the supernatural elements and unfortunately we don't see much of that in this book either.


Alt alludes to the fact that there may be more 'witchy' happenings in future books and I really hope that's the case. That is truly the foundation of this series and why readers continue to read it. That's not to say that this book was poorly written or anything of sort. But the focus was more on the romantic aspects of the book than the mystery itself. I liked Marcus and Maggie together and I think they make a great lead couple, but I think Alt spent a inordinate amount of time on their relationship and less on the whodunit in this one.


Maggie's new apartment complex manager ends up floating in the pool before she even gets a chance to sign the lease. That sets up the mystery but it kind of stalls from there. The motive is revealed early on and it didn't take much to figure out who the killer was. Maggie does use her gifts and Marcus does a bit of wizardry but there isn't much focus on Maggie's growth. She has become a bit more comfortable with herself throughout the series, but I would like to see her really come into her own and own the fact that she is intuitive, an empath and more importantly a witch.


The ending in this one did throw me for a loop and sets up some interesting circumstances for the next installment. This one wasn't my favorite of the series, but it did bring up some interesting ideas and potential for books to come. I still have to wonder though, what in the world is going on in this town? Are we ever going to find out???

Home For A Spell is available NOW from your favorite bookseller. 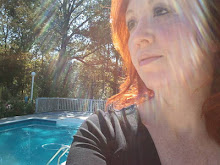 Madelyn Alt is the author of the Bewitching mystery series. Chronicling life for an offbeat group of ghosthunters is anything-but-normal Stony Mill, Indiana. These exciting stories are giving readers spills, chills, and thrills--of both the supernatural and all-too-natural kind. A born aficionado of all things paranormal, Madelyn currently spends her days toiling away in the mundane world of business and her nights writing tales of the mysterious.

The publisher is sponsoring a giveaway of one copy of  Home For A Spell by Madelyn Alt.

~You must be a GFC follow or an E-mail subscriber to participate.
~U.S. addresses only.
~Deadline to enter this giveaway is Midnight EST May 9th.

1. Please leave a comment in appreciation to the author on this post, not the form.
2.Please fill out the FORM
Posted by justpeachy36 at 10:30 AM

This series has been on my to read list for a while. I love stories with magic AND mysteries.

Love the locale of this book, sounds great!

Another great cozy to read.

I'm a fan of this authors books.
Theresa N
weceno(at)yahoo(dot)com

I haven't read this series but I think it is time to start.

I haven't read this series but I think it is time to start.

I am a fan of these books!
Thanks so much for the giveaway!

I just started this series and think it is much fun.
Thanks for the giveaway.
suefarrell.farrell@gmail.com

Thanks a lot for giving us great giveaways
GloriaDeal@aol.com

The apartment manager is the victim? Think I would still like to try this one out as we are planning to sell our house and are looking for an apartment!'

Thanks for the giveaway. I can't wait to read this book. Tore923@aol.com

I would love to read this book. It sounds terrific.

I enjoy stories involving magic and witches. This one sounds good!
mittens0831 at aol dot com

Home For A Spell has been on my WishList for a long time!!!!
thank you for the giveaway!!!!