Family was a hateful bitch, it was. I had the hot poker scars of that burned into my flesh, but, scars or not, sometimes family was all you had worth playing with. Maybe he would see that. Maybe he would want to play too. I played rough.


I played to win.


If anyone knows that having family isn't always a good thing, it's half-human, half-living-nightmare Cal Leandros. But for once, it's not Cal's relatives causing the trouble. That headache belongs to his half brother, Niko, whose ne'er-do-well father is in town. He needs a favor, and if Niko refuses, it just might doom the entire city.


Yet an even more dangerous reunion is in the works. The entire lying, stealing, hormonally hopped-up puck race (including the brothers' lethally charismatic friend Robin Goodfellow) is in town for their millennial meeting - and to hold a lottery that no puck wants to win.


As Cal tries to keep both Niko and Robin from paying the ultimate price for their kin, a horrific reminder of Cal's own past arrives to show him that blood is thicker than water... and that's why it's so much more fun to spill.

Rob Thurman continues the story of the Leandros brothers in her latest book, Doubletake. Family dynamics, both human and supernatural propel this book and give a clear understanding of how the main characters have grown and changed. The bond between these two brothers is remarkable and continues to hold the interest of the reader well into this long running series. Thurman is a gifted UF writer with an imagination that is unparalled in the genre.

The Cal and Niko series is one that has captivated my interest since the first book, Nightlife came out in 2006. Urban fantasy is often known for being dark and gritty. There is a certain edge to it that isn't present in mainstream fantasy or paranormal writing and Rob Thurman is a master of it. Most of her monsters or bad guys are truly bad. Even that side of Cal can be terrifying. She doesn't pull any punches when it comes to the darker side of things and I like that about her writing.

The part of this series and especially this book that really appeals to the reader has to do with the bond between these two brothers. Cal and Niko have supported each other through some really tough times. They sacrificed so much for each other. It's a bond that is not common among men or in UF writing and I think that's what  makes it so special to readers. Cal has, had to make some very hard decisions regarding Niko and their motto, "Brothers before souls" has been tested time and time again. Cal and Niko's relationship is the heart and soul of this series and once again in Doubletake they are forced to to test their bond.

I liked Doubletake a lot because it was the continuation of this wonderful series, but there were a couple of things that were a bit unsettling. When I first read the blurb and found out that the Puck's were having a family reunion of sorts which featured a lottery to see who would be chosen to breed more Pucks, I was really excited. I have always liked Robin Goodfellow and the of the literary liscense that Thurman has taken with his storyline. And I thougtht this would be a huge part of the novel itself, but in reality it didn't go the way I thought it would nor did it impact the ending of the book at all. It was really just one big orgy instead of a group of tricksters coming together. It was quite long and quite graphic. I suppose it's whatever floats your boat, but that part of the book didn't float mine... LOL.

The addition of a new villain, Grimm gives some insight into where Cal's character will be going in the future. You also have the reappearence of Cal's father that complicates things as well. Grimm has a lot of potential but it didn't really come to fruition in this book. Grimm needs Caliban and therefore could not be near as sinister or evil as he made out to be. He was a lot of talk in this book, but I think we'll see him again.

I loved Cal's inner dialogue. The way Thurman writes his voice is amazing. It's very sardonic and shows the fight he wages with himself. Now that he has given up the last shreds of his humanity it is hard to keep the monster inside of him at bay. He constantly fights an inner-battle that is reflected in that part of the narration. I loved the banter and dialogue between Robin, Niko and Cal as well. They are even cracking remarks when faced with certain death. Wish I could be that calm in the eye of the storm.

If you are a fan of the series, the little things about this book that could have been done better, won't matter. We are treated to a lot of growth in just about every familiar character. And the bond that is present between Niko and Cal remains strong and riveting. If you are just starting this series, you miss out on so much by not starting from the beginning. When you become invested in the characters, little things don't seem so consequential. Start with Nightlife, you'll be glad you did. But don't count this series out, it's one of the best dark urban fantasy series' out there.

Doubletake is available NOW from your favorite bookseller. 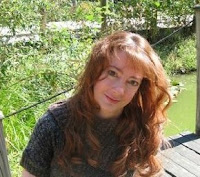 Rob Thurman lives in Indiana, land of cows, corn, and ravenous wild turkeys. Rob is the author of the Cal Leandros novels; the Trickster novels; the Korsak Brothers novels; and several stories in various anthologies.

Besides ravenous wild turkeys, Rob has three rescue dogs (if you don't have a dog, how do you live?) - one of which is a Great Dane/Lab mix that weighs well over one hundred pounds, barks at strangers like Cujo times ten, then runs to hide under the kitchen table and pee on herself. Burglars tend to find this a mixed message. The other two dogs, however, are more invested in keeping their food source alive. All were adopted from the pound (one on his last day on death row). They were all fully grown, already house-trained, and grateful as hell. Think about it the next time you're looking for a Rover or a Fluffy.
Posted by justpeachy36 at 11:40 AM