Review: Agony of the Leaves

Agony of the Leaves (Tea Shoppe Mystery - 13) by Laura Childs


(Received for an honest review from the author) 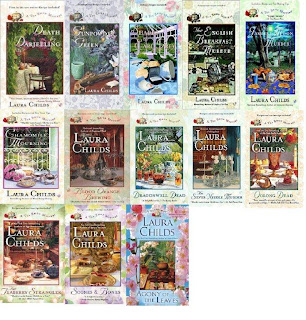 Excerpt from Agony of the Leaves

In the latest novel from the New York Times bestselling author of Scones and Bones, Indigo Tea Shop owner Theodosia Browning finds herself in hot water when a body surfaces at the grand opening of Charleston's Neptune Aquarium...

The opening of the aquarium is a major Charleston event, and Theodosia has been hired to cater tea, scones, and sandwiches for the private party to honor dignitaries and big buck donors. Things are going swimmingly, until Theodosia escapes the party for a momentary rest, only to discover the body of a man entangled in a net, drowned in one of the aquarium's state-of-the-art tanks.

To make matters worse, the victim is Theodosia's former boyfriend Parker Scully. The EMTs on the scene think Parker's drowning was an accident, but when Theodosia notices what look like defense wounds on his hands, she realizes that someone wanted Parker dead. The local police aren't keen on hearing her theory-especially because of her ties to the victim-so Theodosia knows that if she wants Parker's killer brought to justice, she'll have to jump into the deep end and start her own investigation...

Laura Childs continues her highly acclaimed Tea Shoppe cozy mystery series with Agony of the Leaves. This is the thirteenth book in this long running series that continues to delight fans and bring in new readers with each edition. Childs brings Charleston to life with vibrant imagery and lots of local color. This cozy hits a little close to home as Theo's ex-boyfriend is found floating in the aquarium on the night of the opening. Childs is able to educate as well as entertain in Agony of the Leaves and fans will be excited to see what's happening with their favorite characters.


This is a series that I have always had a particular interest in. One of the titles was one of the very first books I received for review and I've been hooked ever since. Laura Childs has such a way with setting. She is able to bring out rich detail in any setting she comes up with. Charleston is such a remarkable city and Childs allows the reader to explore it and learn about it all in the guise a very good mystery.


As per usual there is a lot of great information for tea lovers. Now, I'll be the first to say that I don't drink much tea, but this series always makes me want to. There are so many good sounding blends and flavors. I think perhaps I just don't know how to make it right LOL. But, Laura Childs has such a vast knowledge of tea that it's easy to see it's a passion for her. I love the recipes and tea time tips she always includes in the back of the Tea Shoppe books as well. So, many I want to try.


The mystery aspect of this one was once again stellar. Theo recently broke up with Parker Scully, so I was a little surprised at how quickly he became a victim, but that didn't take away from the plot at all. I loved the aquarium crime scene and thought Childs did an excellent job of coming up with it. After thirteen books I'm surprised at how easy it seems for her to come up with new and exciting ideas for each new book in the series. The suspects were mostly people who were associated with Parker's restaurant business and a new girlfriend. I was kept off track most of the book and only figured it all out right before the author's big reveal... perfect timing!

I can't recommend this series and the other two series' that Laura Childs writes enough. Her writing is very tasteful and imaginative. Her plots are tight and well thought out. She obviously has a larger plan before starting each book, because everything always seems to fall right in place to set for the next one. Her characters in this series have become old friends to fans and she is able to bring more and more personal aspects to each book. I liked going back to Charleston and the Indigo Tea Shop and visiting with characters I've come to love. This book isn't one any cozy fan would want to miss!

Agony of the Leaves is available NOW from your favorite bookseller.

Laura Childs is the New York Times bestselling author of the Cackleberry Club, Tea Shop, and Scrapbooking mysteries. In her past life she was a Clio Award-winning advertising writer and CEO of her own marketing firm. She lives in Minnesota.

I have one of this series on my to be read shelf - cant wait to read it!

I hope to pick up my copy of Agony on Tuesday. I agree with you,I love her books and hope she gains more fans.

Laura is one of my favorite authors.

I love this series and have ever since I found it!