CoverArt: Click on the picture for a larger,clearer image of the covers in the series. 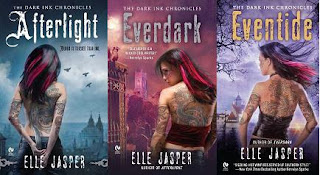 Excerpt from Eventide(Amazon Inside Look Feature)

Tattoo artist Riley Poe is in trouble. After surviving the bite of a powerful vampire, she feels herself change in unimaginable ways. She can no longer hide behind her normal life at the Inksomnia tattoo parlor after a recent rash of vampire attacks in Savannah has her questioning her sanity - and fearing she may have had something to do with them.

Eli Dupre, her vampire lover, has seen the change in her. He tells her they must meet the patriarch of the vampire cult that attacked her if they want to prevent a total vampiric conversion.

In the vampire cult's fortress in Romania, Riley will face her worst fears - and the dark powers threatening to destroy her. And she'll have to do the one thing she's been determined not to do - put her trust in Eli.

Eventide is the third book in Elle Jasper's Dark Ink Chronicles series featuring Riley Poe, a sassy tattoo artist deep in the south that finds herself up to her eye-balls in vampires. Fans of Jasper will relish the third book in this southern vampire series. The atmosphere and ambiance are just as powerful in this one as the first two books in the series and readers are introduced to a lot of new characters and a possible big changes for Riley and Inksomnia.


I have been a fan of Elle Jasper since the first book in this series, Afterlight debuted. The cover art is exception and I think it really personifies what this series has to offer. It's dark and enchanting. The heroine is tattoed and leather wearing and it just gives off a very urban fantasy like vibe. I always enjoy it when I think the cover artist understands what he's painting. Eventide's cover is is beautiful and very atmospheric.


This is one of those series that you need to read from the beginning. You will learn a lot about the characters and how the author writes that you can't just pick up from one book. I think reading all three shows the growth in both Riley as a heroine and in Elle as a writer. Jasper continues to change and evolve the storyline to create a world that is unlike any other writers vision. It's very unique.

There are a few things that are reminiscent of another vampire series which shall remain nameless, but Eli's family is eerily similar to another vampire family that made it all the way to the big screen. They are very tight knit and work as a unit. That is clearly evident in Eventide as they begin to see the changes that Riley is going through. At first it didn't seem like they were concerned but I think it was just like anything else. They didn't want to accept the inevitable. Once they did, they became very proactive and tried their best to save Riley from herself.


Riley is one tough customer and she holds it together pretty well considering she has the venom of two vampires in her blood. She doesn't want to believe that she is becoming what she has striven so hard not to be. But her abilities are starting to become more evident. She is slowing turning and now it's up to Eli, Victorian and his family to prevent what Valarian started. This sets up a pretty nifty triangle. Eli the protective vampire lover, Victorian the one who is so love sick over Riley, it's annoying and Victorian's father who tries to overcome Valarian's venom with his own and inadvertently becomes very attached to Riley, to the point of offering her the throne. Oh, what a tangled web we weave. This series just gets better and better!


The plot was riveting. Until about the second half when Riley goes to Romania. Then it started to change rather drastically. I whole new group of characters are introduced and the reader who was intent on finding out about Riley's change also has to contend with the back stories of a lot of new faces. It got a little confusing and at that point I decided the author was attempting to set up a big change in the series itself. It may be something that just lasts the next book, or it may be something more permanent. But Riley's involvement with the Worldwide Unexplained Phenomenon (WUP) of Scotland certainly sounds interesting. I'm looking forward to the new developments.


Overall this was a good book. It continued a previous story arch that had readers coming back for more and introduced a new direction the series could be taking. Elle Jasper fans will be happy that Riley is back and that Eli is still in the picture and excited about the potential of the changes. I'm betting that the love triangle gets even more tangled in future books and readers are sure to tune in just for that reason if no other. A great addition to a very well written series!

Eventide is available NOW from your favorite bookseller.

Elle Jasper spent her youth buried in the pages of Mary Shelley, Edgar Allen Poe, Bram Stoker, and Stephen King. Now a full-time writer, she lives in and continues to be inspired by the Gothic Revival and Georgian architecture, the moss-draped squares, and the ancient cobbles of Savannah, Georgia.
Posted by justpeachy36 at 10:30 AM