(Received for an honest review from ROC Fantasy )

As a handler, Corine Solomon can touch any object and learn its history. Her power is a gift, but one that’s thrown her life off track. The magical inheritance she received from her mother is dangerously powerful, and Corine has managed to mark herself as a black witch by dealing with demons to solve her problems.

Back home, Corine is trying to rebuild her pawnshop and her life with her ex Chance, despite the target on her back. But when the demons she provoked kidnap her best friend in retaliation, Corine puts everything on hold to save her. It’s undoubtedly a trap, but Corine would do anything to save those she loves, even if it means sacrificing herself…

Ann Aguirre fans will be left reeling with her latest book in the Corine Solomon series, Devil's Punch. Aguirre is well known for her excellent world building skills which are showcased here as she takes her characters into the demon realm. Devil's Punch completely shakes up this series, taking it in a new direction. Aguirre's smooth, unpretentious writing style and descriptive prowess are tested with this book as is the readers resolve.


When I start reading a series it sometimes takes me some time to become fully invested in the characters, but when I do... that's it. Corine Solomon is one of my favorites. I didn't think there was much Ann Aguirre could do that would make me dislike Corine, but that was sorely tested in Devil's Punch. It wasn't that I completely didn't like Corine here, it was just that she was so different. I am used to Corine being a very selfless, kind and loyal friend and there were parts of this book that made me cringe as she starts to change.

In Devil's Punch she shares a part of herself with a Demon Queen. Corine's part being the character readers have grown to love and the Demon Queen part being evil incarnate. My problem came in when the two started to merge together, making Corine someone totally different than she was before. I'm really unclear if Corine will get back to herself in subsequent installments in the series or not and that's a little hard to swallow.


Aguirre's world building skills are eerily good. She has a way with words that not many authors can attain. She is able to make just about any place seem realistic and believable. In this book she takes on the demon plane, more formally known as Hell. Her descriptions of the cities and the demons themselves will make the hair on the back of your neck stand up, that's just how good they are. I thought Demon plane was a very interesting place to set this book, but I missed the Mexico setting I was used to with this series as well.


This book is such a shocking departure from the rest of the Corine Solomon books it almost feels like it's a part of a different series. I can understand the need for a writer to shake things up a bit, to take a series in a new direction, but somehow I think I needed a little more of transition instead of practically throwing out everything I already knew about a character and a setting and starting with something completely different. That's not to say that this isn't a good book, because it is. It's just the polar opposite of the other books in the series.


The ending was also very climatic. Corine and Chance find themselves in a better place than they have been at the beginning of this book, but by the end readers will probably be wondering how in the world they got where they ended up. Chance proves that he is willing to follow Corine anywhere and that he loves her no matter what, but is that enough? This book bases a lot on the theme of what you would be willing to do for someone you loved... whether it be your best friend who is kidnapped by demons because of something you did... or a man you thought was everything you ever wanted. It's on the emotional side in places, readers may need to keep the Kleenex box close by.


The writing is excellent. The world building is exceptional. Some of the characters we have learned to love are back, but some of the supporting cast is missing. Is this book a new direction? Or is it just a bump in the road? Book 5, Agave Kiss comes out next year and I guess we will have just have to wait to see where this one goes. Corine is different. The setting is different. There were times when I wanted to cry and times when I wanted to stamp my feet like a two year and yell at the characters... LOL! It's certainly worth your time to read!

Devil's Punch is available NOW from your favorite bookseller. 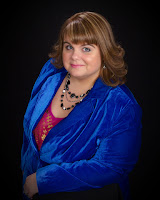 Ann Aguirre is a national bestselling author with a degree in English Literature; before she began writing full time, she was a clown, a clerk, a voice actress, and a savior of stray kittens, not necessarily in that order. She grew up in a yellow house across from a cornfield, but now she lives in sunny Mexico with her husband, children, two cats, and one very lazy dog. She likes all kinds of books, emo music, action movies and Dr. Who. She writes urban fantasy (the Corine Solomon series), romantic science fiction (the Jax series), apocalyptic paranormal romance (the Ellen Connor books with Carrie Lofty), paranormal romantic suspense (as Ava Gray), and post-apocalyptic dystopian young adult fiction.
Posted by justpeachy36 at 9:30 AM