Review: A Sliver of Shadow

A Sliver of Shadow (Abby Sinclair - Book 2) by Allison Pang 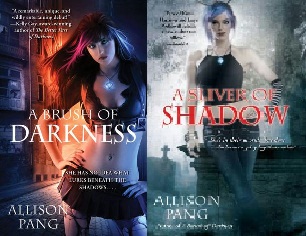 Excerpt from A Sliver of Shadow


WAR IS HELL. AND WAR WITH HELL IS NO FUN EITHER.

Just when her new life as a TouchStone—a mortal bound to help OtherFolk cross between Faery and human worlds—seems to be settling down, Abby Sinclair is left in charge when the Protectorate, Moira, leaves for the Faery Court. And when the Protectorate’s away . . . let’s just say things spiral out of control when a spell on Abby backfires and the Faery Queen declares the Doors between their worlds officially closed. The results are disastrous for both sides: OtherFolk trapped in the mortal world are beginning to fade, while Faery is on the brink of war with the daemons of Hell. Along with her brooding elven prince Talivar and sexy incubus Brystion, Abby ventures to the CrossRoads in an attempt to override the Queen’s magic. But nothing in this beautiful, dangerous realm will compare to the discoveries she’s making about her past, her destiny, and what she will sacrifice for those she loves.

A Sliver of Shadow is Allison Pang's second novel featuring heroine Abby Sinclair. Pang is a relatively new voice in the Urban Fantasy genre and brings a lot to the table in her latest book. From snarky, slightly irreverent dialogue to underlying subplots and political machinations this book has a lot going for it. Pang's characters include Fae and Daemon's and she delves into issues regarding family and what one is willing to sacrifice for those they love. It's an exciting installation in a relatively new series.

A Sliver of Shadow was my first experience with Allison Pang's writing and I'll admit that I wish I had read A Brush of Darkness first. It was not because I felt like I had missed out on any information or that I didn't understand the action but I felt I would probably have understood the characters a little better. That's not to say that I didn't like the characters, I did, but I think their actions would have been a little more explainable. Abby seems a very capable, interesting heroine. But shes had a few experiences that I wasn't privy to in the first book, that may have allowed me to view her differently.

I liked Abby and thought she was a good heroine. Throughout the story she taught me as a reader a lot about family. Not just the family you are born with, but the family you make for yourself. They say that blood is thicker than water, but I have had friends in my life that I was closer to than my own siblings. And Abby proves that same thing out, because she is very close to those she chooses to have in her life. She shows just how much she is willing to do for her friends and where her family loyalties lie.

I enjoyed the whole aspect of the love triangle that is beginning to build between Abby, Brystion and Talivar. These two guys are total opposites. I always find it amazing how a person can love one person that has a certain set of qualities and attitudes and turn around and fall for someone who is light and dark different from that person. Maybe it's the variety LOL I don't know! But it's definitely interesting. Brystion's attitude is more brass. He doesn't want Abby to be in harms way so he does things and says things that push her away. While Talivar is more subtle. Instead of forbidding Abby to do certain things, he joins her, intends to protect her and lets her be her own person. That makes me team Talivar, and I'm Ok with that. He's super supportive, very loyal and easy to like.

The plot was somewhat complicated, which I like. I don't like for things to be completely spelled out for me. I want to think about it and wonder what's going to happen or the reasons someone has for doing what they do. And this one really had the analytic quality. The Crossroads concept was unique and different. I liked the idea that the Otherfolk could travel between worlds and that Abby was a catalyst for that. Pang's Fae characters were spot on the way I had always heard them portrayed and I liked that she stayed a bit old school with her interpretations. The Faerie Queen losing her marbles was a really great touch, in genius.

I enjoyed this book a lot and wanting a little clearer understanding of things I plan to go back and read A Brush of Darkness. I definitely recommend it to UF readers and to those who want to catch a new series close to the beginning. The characters are well written and full of layers. The plot was one that readers have to think about a bit and that made it all the better. This book has a lot of emotion undertones and deals a lot with family and sacrifice. It's a great addition to the series and I look forward after that cliffhanger ending to the next book coming out tentatively in October.
A Sliver of Shadow is available NOW from your favorite bookseller.

A marine biologist in a former life, Allison Pang turned to a life of crime to finance her wild spending habits and need to collect Faberge eggs. She also loves Hello Kitty, sparkly shoes, and gorgeous violinists. She spends her days in Northern Virginia working as a cube grunt and her nights waiting on her kids and cats, punctuated by the occasional husbandly serenade. Sometimes she even manages to write. Mostly she just makes it up as she goes.
Posted by justpeachy36 at 11:30 AM