(Received for an honest review from Ace Urban Fantasy)

Coverart: Click on the image for a clearer,larger picture of books in the series. 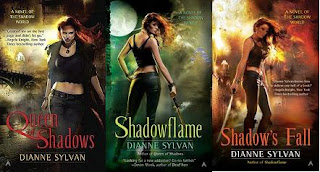 Excerpt from Shadow's Fall(Courtesy of Amazon's Inside Look Feature)

For three years, Miranda Grey-Solomon has kept her role as vampire Queen of the South separate from her Grammy-winning music career. But now, her dual lives are starting to collide, threatening everything Miranda and David, her Prime, have worked for.

To make matters worse, the entire Signet Council has descended upon Austin for its ten-year summit, bringing with it Prime James Hart of the Northeast, a sworn enemy come to take his revenge on those who defied him. As Hart’s machinations lead to outbreaks of violence across the South, Miranda and David receive an unexpected offer of help from David’s sire, an ancient and powerful vampire with knowledge that may be their salvation – or their doom.

Queen Miranda returns in Dianne Sylvan's third book in the Shadow World series, Shadow's Fall. Fans of the series have eagerly awaited this installment and they won't be disappointed. Sylvan's voice in the dark urban fantasy sub-genre is strong and loud. She doesn't shy away from difficult themes or situations and readers will love her sharp wit and dark sense of humor. A gritty addition to a edgy, dark series.

Readers who have followed this series from it's inception will probably be hoping that this installment is quite a bit different from the last book in the series. Queen of Shadow's was an excellent book. It was dark and gritty and Sylvan created a world and characterst that dark urban fantasy fans could fall in love with and they did by droves. But the second book in the series, was so vastly different from the first. Shadowflame was brassy and brazen and it there were some good things about it. Sylvan did not back down from the tough issues and showed a lot of backbone in the writing of that book, but it still fell short in a lot of ways with fans.

Shadow's Fall is what I would call a rebound book. A book that gets a series back on track or takes it in a different direction. I think one of the main differences from the last book to this one is the character developement. I think a lot of fans were shocked at the direction Sylvan took David's character in Shadowflame. In this installment David is back to his old self. He isn't the conflicted and raging man from the last book. He has his head on straight and he knows who and what he wants here and that is great improvement from where he was.

Miranda has always been able to seperate her status as the Vampire Queen of the South from her music career until now. It seems like everything is kind of colliding. She is still the same woman readers met in book one and I think that was also a great constant through the second book. She has grown a lot throughout the series and she continues to do so in this installment. She certainly seems to have a hard time getting everything under control. I feel like the author throws a lot at her at one time, but she is well able to take it. She's a strong woman and a strong character. Sylvan does a fantastic job with her and I look forward to what happens next in her story.

Good grief! What a cliffhanger! I'm not exactly sure how I feel about it yet. I was expecting to be shocked, but this was more than that. I think the author is doing a good thing here. She is drawing the reader so far in, that they can't hope to miss the next book. They will have to find out what happens here. It's nice to see when an author falters a little bit as far as the fans are concerned. They can still bounce back, even better than before. A great new book in a series with a lot of potential!


Shadow's Fall is available now from your favorite bookseller. 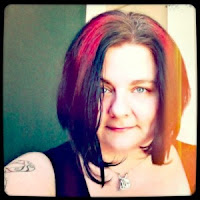 Dianne Sylvan, author of the Shadow World novels (Queen of Shadows, Shadowflame, Shadow’s Fall, and at least two more forthcoming) as well as two books on NeoPagan spirituality (The Circle Within: Creating a Wiccan Spiritual Tradition and The Body Sacred), lives in Austin, Texas, the only sane part of the entire state.

She is an unabashed Mac enthusiast, a froofy iced coffee beverage addict, a chronic Twitterer, a seasoned snark professional, a Spiritual Nomad, a shameless Vampire Diaries (TV) fangirl, a happy herbivore, a bit of a moody Scorpio, a sock junkie, a slightly freaky tattooed postmodern hippie, a cupcake baker extraordinaire, and is prone to hyperbole as well as fits of profanity.

When she’s not glued to the internet or writing about vampires, she volunteers as bio writing coordinator for the Dog Marketing team at Austin Pets Alive!.

She collects vegan cookbooks, wacky t-shirts, blank journals, obsessions, and dust.
She lives with two neurotic cats, Stella and Owen.
Posted by justpeachy36 at 9:00 AM