Now or Never (Wizards of Nevermore - Book 2) by Michele Bardsley


CoverArt:Click on the picture for a larger, clearer image of the books in this series. 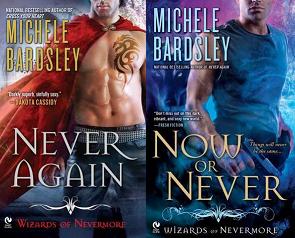 Excerpt from Now or Never

Lenore Whyte's blood might be able to open a portal to the underworld, but she doesn't understand how to wield the magic bound within her-- knowledge that would have come in handy when she was kidnapped in order to be sacrificed.

Tormented by nightmares of a woman's death, Sheriff Taylor Mooreland is shocked to find the woman from his visions chained to an altar in the woods. He barely knows her, but something compels Taylor to protect the mysterious Lenore, no matter what. Even if it means dealing with magic, which he's always avoided. And when an investigation into a series of suicides leads Taylor deep into the town's past, he discovers that the keys to saving Lenore and Nevermore may have a surprising connection.


Michele Bardsley continues her Wizards of Nevermore series with a second book, Now or Never. Bardsley's quaint Texas town is full of magical energy and quirky interesting characters. Readers will be enchanted and want to learn more about the denizens of Nevermore and their connection to the magical houses. Bardsley's series follows typical paranormal romance patterns but it still unique. Readers will find the world building to be exceptional.


This is the first book in this series that I have read and it does well as a stand alone. I like the misty look of the cover, which kind of gives off an air of mystery. That's one of the things I liked most about this book. Now and Never is full of magic and enchantment, but there is also an edge to Lenore's situation. She has latent magical abilities that more than one of the magical houses wants. Raven house is the most avarice and diabolical in their machinations. They plan to use Lenore as the center piece for a magical ritual that will cost her, her life.


Lenore is a strong character in this book and she really has to be. She wants nothing more than a normal life and she's fighting with everything she has to get that. And all of the sudden the bottom drops out. She is being hunted and it's up to her to use every ounce of strength to survive. I loved the fact that Bardsley allowed the character to be strong, yet vulnerable. Her relationship with Taylor is compelling and full of surprises. I felt like they were destined for each other, but the build up didn't last long enough for me. I thought the author would have benefited in drawing this aspect of the story out a little bit.


Taylor is also a solid character. I liked the fact that he was a person who didn't have magic of his own, yet he was around it all the time. I thought that throwing him into the fray, so to speak, with magic and magical elements was a stroke of genius. It was like light and dark or the two sides of a coin. The author allows Taylor to dream of Lenore even before he met her and I thought that was romantic. Taylor is a protector. He has this nature that wants to serve and take care of people. He's in a good profession as a sheriff in a town on wizards.


Nevermore, is such a great town. I loved the setting and Bardsley world-building is memorable. She sets up the whole world of the magical houses in such a way that it seems new and refreshing though it is a theme that has been used before. The characters and people who make up the town are quirky and unique. This is a town many readers will want to visit, the characters will feel like old friends. I'm looking forward to more books in this series.


I enjoyed Bardsley's style, though the inner-dialogue was a bit repetitive at times. I think the author was stressing certain things by using this technique, but it was a bit too much. I want to see things happen, not be told they are happening. Action is important in the book like this. I thought there was enough action, but there were things that could have happened to speed things up a little bit. It's not a long drawn out book. It's a quick read, but it needed a little something, something here and there. I think the series has a lot of potential and look forward to where we go from here with this author and these characters.

Now or Never is available NOW from your favorite bookseller.

Nationally bestselling author Michele Bardsley is multi-published in several genres, but she is best known for her vampire mom series set in the fictional town of Broken Heart, Oklahoma. She currently lives in Tulsa with her family, two cats, two guinea pigs, and a sweet dog named Naomi.
Posted by justpeachy36 at 7:43 PM