Review: Blood On The Bayou

Blood On The Bayou (Annabelle Lee - Book 2) by Stacey Jay 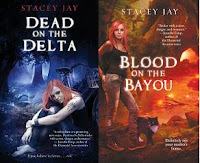 Excerpt from Blood On The Bayou

First came a terrorist attack. Then the mutations—and Fey who had lived in harmony with humans turned deadly. Now, most people hide behind iron gates. But those who are immune—and those with enough courage—can venture into the Louisiana Delta . . . and a nightmare world of magic.

Annabelle Lee, a Fairy Containment and Control agent blessed—or cursed—with immunity to Fairy venom, is once again called upon to help solve a murder deep in the bayou. But this investigation is off the books and her ex-lover, Hitch, is leading the hunt for a secret chemical weapons lab and an FBI mole providing it with human lab rats.

Helping Hitch means certain interpersonal disaster with her estranged boyfriend, but Annabelle knows exactly what it feels like to be a lab rat. Her new, fairy-attack-induced paranormal powers seem to have few negative side effects, but would that change if she stopped injecting herself with the mystery drug delivered to her by the even more mysterious—not to mention ridiculously attractive—Tucker? A man who can turn invisible at will, and who makes no bones about how dead she’ll be if she reveals his secrets.
As the murder investigation progresses, Annabelle learns Tucker isn’t the only one with secrets, and that the only thing that cuts deeper than a friend’s deception, are the lies we tell ourselves.

Blood on the Bayou returns readers to the deep South where faeries are out to take over and humans hide in secrecy. Stacey Jay's second book in the Annabelle Lee series is gritty, dark urban fantasy that readers won't want to miss. Jay's Louisiana Bayou is anything but friendly and the characters have a lot more to worry about than a few alligators. The world building competes well with character development as Jay's biggest strength in this novel. If you are an urban fantasy fan, this is not a series to be left on the shelf.


I love books set in the South with paranormal elements. Louisiana has always been one of those places that conveys a sense of mystery and magic. Jay plays on that theme with the setting for this series and readers will be able to feel the eery vibes this book puts off. It's one of those that makes the hair on your neck stand up. It just seems like a place where magic could really happen and I think Jay really banked on that and used it to her advantage here.

Dead on the Delta introduces readers to Jay's faery mythology, but it becomes a lot more clear in Blood on the Bayou. Readers learn a lot more about what the faeries are really up to and why. The whole premise of the series is an interesting one. You have faeries who have basically taken over the Earth as readers know it. They bite humans and inject them with a type of venom that induces faery madness. But there are certain members of the population that are immune. That's where our heroine, Annabelle comes in. She was supposedly immune to faery venom but when she gets bitten at the end of Dead on the Delta we begin to see that everything isn't what it seems. I loved the fact that Jay didn't just tell the reader everything they had to do a little thinking on their own. I like a book that gives me something to ponder.

The bad guys aren't exactly who you think they are. Can anyone really be trusted? What's a girl to do when she doesn't know where to turn next. That's Annabelle's biggest obstacle here. Underlying themes in the series and in this book in particular include trust and loyalty. Who's really telling you the truth or is it just what you want to hear? I like that Jay was able to explore these ideas quietly within the plot and doesn't beat the reader of the head with them. It's just something that becomes more evident the more you read.


Now I'm definitely one to like a good love triangle, but Annabelle goes a step further and adds a third mysterious and very handsome suitor. Cane is the man she should want to be with. The safe and comfortable one. Hitch is the ex lover she has never really gotten over. But where does that leave Tucker? He's the mysterious bad boy that has more up his sleeve than he's about to show in this one. There are all kinds of possibilities with all these leading men, but I admit that's it's a bit far fetched for me. I mean what does Annabelle have that would garner her that much attention?


I loved the fact that Jay understands that good leading character doesn't necessarily have to be a saint. Annebelle is anything but. She's a heavy drinker, a pill popper in some instances and very irresponsible. She's definitely flawed but that gives her a lot of room for growth. In Dead on the Delta she was pretty unapologetic for her behavior, in Blood on the Bayou she is setting a course to do better and in a lot of cases she succeeds here, but she still has a long way to go.


Jay sets up a lot of interesting situations for future books in this one, so I'm sure this won't be the last we see of Annabelle and her friends. Hitch needed her help here and she couldn't refuse him, but it may cost her a lot more than she bargained for. Is Cane really over what happened with his sister in Dead on the Delta, I doubt it... would you be? Tucker... there's a real enigma that I'm sure Jay will want to explore in future books. This is a great series so far and I think readers will who like dark fantasy with a lot of sarcasm and dry humor will love it!

Blood On The Bayou is available NOW from your favorite bookseller.

Stacey Jay is a recovering workaholic (or at least working hard at recovering) with two small children, and a passion for playing pretend for a living. She’s been a full time mom-writer since 2005 and can't think of anything she'd rather be doing. Her former careers include theatre performer, professional dancer, poorly paid C-movie actress, bartender, waiter, math tutor, and yoga instructor.
In her very limited spare time, Stacey enjoys cooking elaborate dinners and eating them very slowly, dressing up in costumes with her sons, and drinking wine with her husband. She loves to hear from readers and personally answers every single email she receives.
Posted by justpeachy36 at 9:30 AM