CoverArt: Click on the picture for a larger clearer image of the covers in this series.

Sarah and Mia Castle are closer than best friends and share just about everything, including a deep and abiding love for all things related to Jane Austen. Their annual trip to the Jane Austen Festival in Bath is a highlight of their lives - until the year they discover that no matter how close two sisters may be, it's impossible to share one man between them. Even if he does seem like their own perfect Mr. Darcy, if one wins him, won't both of them lose?


The final book in Victoria Connelly's Austen Addicts trilogy, Mr. Darcy Forever is a modern take on Sense and Sensibility. Jane Austen fans will love this book and new readers to Jane Austen fiction will be enthralled and captivated by Connelly's characters and majestic setting. Connelly continues to surprise Chick Lit fans and Austen enthusiasts alike with book after book featuring one of the most beloved leading men out there. If you love all things Austen, this book is definitely for you.

Having been a lover of Jane Austen for many years, I have read most of her work and find that very few authors from that time period come close to the mastery and overall exceptional writing that Austen did. In this day and age however, a new sub-genre all it's own has formed for what many like to call Austen related fiction or Jane Austen fiction. Basically, it could be a modern re-telling of Austen's work, a sequel, a prequel or a variation.

Mr. Darcy Forever is what I would term a variation. Connelly takes the overall story of Sense and Sensibility and transfers it to modern times. She changes a few things to be sure, she uses literary license to build her own plot and make changes in order to make it her own. Connelly also throws in a bit of Pride and Prejudice, clearly Mr. Darcy is quite the leading man.


I loved Connelly's concept of pitting the two sisters against each other. Both sisters are after the same man, but in reality no one wins with this scenario. Essentially, no matter who ends up with him, they still lose because they will lose a sister in the process. I liked the fact that Connelly switches back and forth between the time they were still close to the time their relationship took the downward spiral. It shows the growth of the characters and it shows just how hurt each sister was, when everything is said and done.

I liked the idea of the Jane Austen Festival and felt it provided a catalyst for the sisters. At one time they had gone to the festival together, but not now. It was amazing to me to see how their relationship changed and evolved over the years. My sister and I fight, it's how we operate. But it works for us... and that's what counts.

I recommend this book to Austen fans, Austen fiction enthusiasts, chick lit readers and anyone who needs a man like Mr. Darcy in their life. It's a great final book in the trilogy. I am still not real sure where each book ties together, perhaps it is just the Austen theme, but I liked all three.

Mr. Darcy Forever is available NOW from your favorite bookseller. 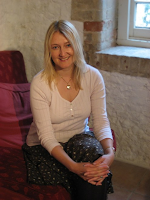 Victoria Connelly was brought up in Norfolk, England before moving to Yorkshire where she became a teacher. After marrying in a medieval castle in the Yorkshire Dales, she moved to London where she lives with her artist husband and a mad springer spaniel.

She has three magical romances published in Germany and the first, Flights of Angels, was made into a film. Victoria and her husband flew out to Berlin to see it being filmed and got to be extras in it!

She also writes romantic comedies and her first, Molly's Millions, is about a lottery winner who gives it all away. She's now writing a trilogy about Jane Austen addicts. The first will be published in the UK in September and in the US in spring 2011.

She also writes for children.
Posted by justpeachy36 at 10:30 AM