(Received for an honest review from Berkley Trade) 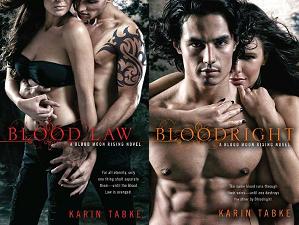 The coming of the Blood Moon will lead two Lycan packs into war, spur two rival brothers into conflict, and spark an act of vengeance so evil that its effects will be felt for generations.
One woman stands at the center of it all...

After years of waiting, the Blood Law is at last avenged. Lycan Alpha Lucien Mondragon takes revenge on his brother, Rafael. Lucien is poised to slay Rafael's life mate, the Lycan/Slayer half-breed Falon- but cannot complete the kill. For Falon's mystical powers and fiery nature awaken a heart Lucien thought long dead. Instead of ending her life, Lucien defiantly marks Falon as his own, tormenting his brother to insanity and spurning Rafael's blood thirst for his own revenge.

Though terrified by the savage Lucien, Falon finds herself inexplicably drawn to his primal rage and strength by a desire she cannot resist. Torn between the true love she has for Rafael and the burning hunger she holds for Lucien, Falon knows that the will of her heart will lead her to her destined life mate. But it may also doom the Alpha brothers-and the Lycan race-to extinction...


I hardly know where to start with this one. Blood Law, this first book in this series, focused on Rafael and his life mate, Falon. The story was intense and passionate. Readers could feel the love between these two, and were totally taken aback at the end of the book, when the Council gives Falon to Lucien in payment of the Blood Law. An eye for an eye. That was the huge cliffhanger that had readers biting their nails. Now in book two, Bloodright the action picks up right where the last one ended. Falon is now in Lucien's keeping despite her feelings for Rafael.


This is where it gets complicated. The love Falon shared with Rafael was amazing. It was romantic and sensual and very alluring. Now she is thrust into a situation where she is the catalyst that is driving these two brothers even further apart by jealousy and vengeance. I loved Falon in the first book, Falon in the second book, not so much! It's almost as if she turns on a dime. She supposedly has this great love for one brother, but ends up very quickly sleeping with the other twin and falling for him. She contends throughout the book that she loves both of them.

I might have believed that possible had I not read Blood Law first and read the deep connection forged between Falon and Rafael. It made her relationship with Lucien just not ring true. It seemed a bit contrived to get Lucien's story out there. I think I was so invested in them as a couple in book one, that I was unable to get into her relationship with Lucien as much, it just didn't seem to fit the story. Rafael is the loyal, wonderful man, while Lucien is the brooding, dark anti-hero. It was just a little hard to fathom Falon's abrupt switch.


I read a few erotic romances every month and I like them a lot. I definitely think they have their place. Some of them push my limits a little bit and others are just good old fashioned hot and steamy. Bloodright is in a category all it's own. The sex scenes in this one are definitely not for the faint of heart. There are a couple of scenes where one or the other character is in human form and the other is in animal form. Now that's a little hard to swallow for some of us more conservative minded people. I'm sure there will be others who will embrace this, but I didn't want to leave readers in the dark about this part of the book.


I really enjoyed the overall plot line of the book. The whole brother against brother theme and the Blood Law, was amazing written. I thought Tabke did a great job of showing the fact that these brothers may be separated by circumstance, but they are still brothers deep down despite how they treat each other. The Blood Moon will rise and the packs will have to fight together against the slayers. There is no getting around that. They must consider their packs and the future. I can't wait to see how this plays out. I did have some issues with this one, but overall it was still a very good book, if you can hack it LOL! Take this review with a gain of salt and make your own decision.

Bloodright is available NOW from your favorite bookseller.

For a long time, controlled chaos ruled Karin’s life. Busy mother of four, owner of her own successful business and wife to a street cop, she harbored thoughts of twisting plots and hot romantic scenes. Now, with only one child left at home and hubby retired from law enforcement, Karin happily pounds out those steamy scenes at her keyboard.
Still semi-distracted by her adult children (Yay! no more phone calls from the high school!) and her husband now a successful football coach (Yay! No more worrying when he’s out on the street!), Karin turns out stories about hot cops, bold knights, bad boy werewolves, and the women who bring them to their knees.
A full-time writer, Karin draws on a lifetime of stories and backdrops that few outside of the law enforcement community ever see, let alone hear about. Controlled chaos now reins supreme through the pages she writes where hot heroes serve, protect, and pleasure from page one to The End.
Karin also writes paranormal romantic suspense as Karin Harlow.
Posted by justpeachy36 at 10:00 AM