Excerpt from A Lady's Revenge(From Amazon's Inside Look feature)

NOTHING GETS BETWEEN A LADY AND HER VENGEANCE...

In a daring rescue,beautiful and wily secret operative Cora deBeau is reunited with her childhood friend Guy Trevelyan, who wants so much from her now than friendship...

But Cora's mission against the French has become personal, and the thought of revenge is driving her relentlessly. Even the fire between her and guy won't deter her. Except Guy isn't going to allow Cora to break free of him. He's going to stoke that fire until they both go up in flames...


A Lady's Revenge is the first book in the Nexus series, by debut author Tracey Devlyn. Devlyn entices readers with a story of revenge and justice. Mixing history with action and suspense, this novel is not one historical romance fans want to miss. With a strong female lead and a dashing hero, this is a book that will appeal to fans of many genres. Devlyn is adept at setting the scene and her action sequences read like a movie script. There's a lot of potential in this one and romance fans will certainly approve.

I really enjoyed this novel. Lately I've been reading a lot of Urban Fantasy and paranormal stuff, and a lot of cozy mysteries and I was looking for a change. Reviewing A Lady's Revenge was just what the doctor ordered. As many of you know I'm a former history major and any novel set in an earlier time period generally strikes a cord with me. This story in particular really hit the spot. The setting is the Regency period, another favorite of mine and it focuses on the war and conflicts between England and France. I loved all the historical references and detail that Devlyn added to enhance the story. It has rich period detail and was well thought out.

Much of this book dealt with Cora's mission to seek revenge for the death of her parents. This definitely isn't one of those draggy books. It has action, suspense, a little bit of torture and a heavy dose of kidnapping. This romance is hard fought and has some obstacles including the fact that the hero may have been responsible for the heroine falling into the hands of the enemy. Cora and Guy are old friends and lovers and the spark of recognition is nothing compared the sparks that fly between them. Both are passionate and intense. They'd have to be to make good spies. I love a good spy novel!

Because of the intensity of the book, I think the character development suffered a little bit. This wasn't a huge problem in the book. I would just have liked to have seen the romance take a more prominent place in novel. The suspense and action really kind of take over and make the romance more secondary, which may not appeal to some readers. It is a book about revenge and the author delves deeply into the subject, which left little time for other things.

The sensuality expressed between the lead couple was definitely hot. The romantic scenes could raise the temperature a few degree's given the opportunity. i felt the author stayed true to the period and how things were done. The scenes were steamy but not unduly so. I enjoyed this one and I think you will too!

A Lady's Revenge is available NOW from your favorite bookseller. 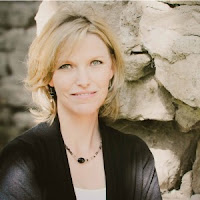 Tracey accepted a three-book deal from editor Deb Werksman of Sourcebooks, Inc. in April 2010. Her first release, A Lady’s Revenge, will hit the bookstores in April 2012. Tracey is represented by Donald Maass of the Donald Maass Literary Agency.
Tracey lives in the Midwest with her once-in-a-lifetime husband.