(Received for an honest review from Ace Urban Fantasy)

Coverart: Click on the picture for a larger, clearer image of the covers in this series. 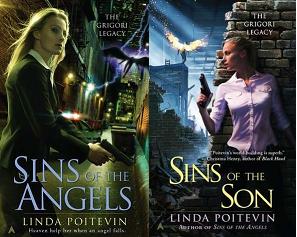 Excerpt from Sins of the Son

Synopsis:
A detective with a secret…

When homicide detective Alexandra Jarvis sees a photo of Seth Benjamin on a police bulletin, she knows that Heaven’s plan to halt Armageddon has gone terribly wrong. As the only mortal aware of Seth’s true nature, only she can save him.

Aramael was a hunter of Fallen Angels until a traitor forced him into earthly exile. Now, with no powers and only a faint memory of Alex, his mortal soulmate, he will stop at nothing to redeem himself—even if it means destroying Seth in the name of the Creator.


A world with little chance of redemption…


As Alex’s need to protect Seth sets her on a fiery course with the determined Aramael, the coming conflict between them may push the world over the edge—and into the very chaos they’re trying to prevent.

The ultimate conflict, good vs. evil, is at the center of the second Grigori Legacy book, Sins of the Son. Linda Poitevin's urban fantasy series based loosely on Christian beliefs with a modern spin, is anything but boring. This fast-paced novel will have readers on the edge of their seats. The world-building alone is so well written that readers will find themselves in the middle of the war between the Angels and the Fallen, on the verge of Armageddon. A complex, intense novel that is hard to put down and even harder to forget!


I admit that I had some mixed feelings when it came to reading this series. Being a Christian myself, it's a little hard for me to separate my beliefs and ideas from the context of a book sometimes. I suppose I see everything from a certain perspective and it's unsettling when things don't follow that grain. But after reading both Grigori Legacy books I have to say Linda Poitevin's vision of Lucifer and his Fallen was simply amazing. She uses the Christian belief system as the backbone of her books, but puts her own spin and take on it, which is what one would expect in a fictional series. It's very well done and the world-building is complicated and intricate. I liked Sins of the Son a lot. It has some very plot elements and the suspense is ramped way up.


Sins of the Son essentially picks up the story right after the end of Sins of the Angels. Alex is doing desk duty and trying to stay out of trouble. When Caim, one of the fallen, went on a killing spree in Toronto, Alex saw some pretty unbelievable stuff that she can't explain for more than one reason. It's basically a case of ending up in the nut house if she tells the truth and a case of holding it all in til it explodes if she doesn't. She's also facing the fact that she's lost her soulmate, Aramael. What she doesn't know is that he is still here, banished and in pain of his own. She is lonely and a little desperate. I thought Poitevin did a great job with Alex and showed her motivations well.


The situation with Seth is a "Save the Cheerleader, Save the World!" scenario, only in this case it's "Save the Angel, Prevent the War!" Now that Seth has chosen to give up everything to come to Earth to be with Alex, he has somehow lost his memory. Heaven's plan to prevent Armageddon is on the rocks without him. Alex has to protect him and help him regain his memory if there is any hope. Trouble is, Aramael has turned assassin and Seth is his target. That may be a little hard on a relationship. I loved the way that Poitevin keeps Aramael and Alex close but not quite together. This is urban fantasy we're talking about. It doesn't focus too much on romance, but love is the ultimate motivation in this series, whether is the love between the characters or the love of the Creator.


One of my favorite parts of this book and one of the reasons I had to throw out my qualms about reading the series, was Lucifer. Lucifer has always been that illusive character that I never really thought authors got a handle on. In Sins of Son, readers get to see things from Lucifer's perspective and it isn't what you might expect. Yes, he is the ultimate evil, the worst of the worst. But what got him there? How did he become so separated from the Creator? I liked the fact that Poitevin showed Lucifer as abominable and ruthless and conniving and all those bad things, yet she was able to show readers a different side as well. The side that regrets being parted from the Creator. The side that wishes for reconciliation but still continues to press toward war. He's a really messed up dude! I enjoyed her portrayal of him very much.


This is just really good Urban Fantasy reading. It's suspenseful and it's gripping. It gets you by the throat and doesn't let go until the end. The characters are multi-faceted and interesting. The mythology and world building are way above average and it's just a really good series. Sins of the Son in my opinion was better than the first book and I hope the series continues to build in intensity toward the final battle between good and evil. Who would have thought I'd like this one? I didn't think so! Just goes to show you fiction is fiction and fact is fact! Don't miss this one! You'll be sorry you did...

Sins of the Son is available NOW from your favorite bookseller. 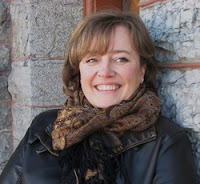 Linda Poitevin was born and raised in B.C., Canada’s westernmost province. Growing up in an era when writing was “a nice hobby, dear, but what are you going to do for a living?”, Linda worked at a variety of secretarial jobs before applying to be a member of the Royal Canadian Mounted Police (RCMP). Due to an error in measurement, however, she was turned down when she didn’t meet the height requirement of that time. Undeterred, Linda became a civilian member in the force and was a dispatcher for two and a half years, during which time she met her husband, a police officer.


Following their transfer to Ottawa, Linda went on to become a real estate agent and then a human resources consultant before starting a family and becoming a stay-at-home mom and homeschooler. Now that she has realized writing can be more than a nice hobby, she continues to  vicariously  live her dream of being a cop through her characters.


Linda currently lives near Ottawa with her husband, youngest of three daughters, one very large husky/shepherd/Great Dane-cross dog, a cat, two rabbits, and a bearded dragon lizard. When she isn’t writing, she can usually be found in her garden or walking her dog along the river or through the woods.


In addition to her books, Linda also does freelance writing and editing. Information about her services can be found at www.lindapoitevin.ca. Linda is a member of Science Fiction & Fantasy Writers of America, Quebec Writers' Federation, Romance Writers of America, RWA Futuristic Fantasy Paranormal Chapter, and Ottawa Romance Writers' Association.
Posted by justpeachy36 at 10:30 AM