Nightborn (Lords of the Darkyn - Book 1) By Lynn Viehl

(Received for an honest review from Signet Select)


Lynn Viehl on the WEB: blog

Excerpt from Nightborn from Amazon's Inside Look feature.

Because he has sacrificed everything, even love, for his duty. When he is ambushed while retrieving an ancient Templar scroll, he is saved by Simone Derien, an innocent who captivates him.

Only Simone knows the scroll's terrible power, and her duty is to prevent its curse from being unleashed. Somehow she must recover it while resisting the dangerous passion she feels for the handsome warrior.

As Korvel helps her track the scroll and elude a crazed assassin on their trail, Simone hides another terrifying secret: She has been ordered to kill Korvel as soon as they secure the treasure...


Nightborn is the first book in a spin off series by Lynn Viehl. Though the Lords of Darkyn is considered a new series, it is basically the continuation of the Darkyn world. Readers who are familiar with the Darkyn series will love this new addition to this dark and sensual world. Viehl understands paranormal romance and what it takes to make it work. Fans of her writing know that she takes great pains to build the complexity of her plots and make them clever and engrossing. A great start or a great continuation to the Darkyn series, take your pick!

Nightborn was an interesting book for me, as I had never read any of the other Darkyn novels or anything by this author. Viehl's world is filled with mystery and intrigue and features a group of very old vampires who live among humans. Yes, it was another vampire novel. But I've learned from reading many in the genre that they are not all the same. Viehl separates her vamps from the masses by giving them compelling personalities and back stories. Though had not read any of the other books in this complex series, I was able to follow the action and understand who was who, even those characters that were apparently part of other books Viehl has written.


It is my understanding that Korvel was a character in previous Darkyn novels that wasn't exactly an angel. He had some issues with another woman, Alex who belonged to someone else. I thought it was interesting that Viehl decided to redeem this character and give him his own story. Korvel is the adviser to the King of the Vampires, Richard. It quickly obvious to the reader that Korvel is extremely devoted to Richard. He feels he has a duty to him and it made Korvel's character a little easier to understand. He did a lot of the things he did out of duty and respect to his King. Korvel was also very passionate. He was all in, no matter what the situation was.


I found Simone to be a lot of fun to read. She was strong and independent. Both she and Korvel had this in common. They also both shared a tragic past which included traumatic childhood events and torture. Richard also used Korvel's convictions and sense of duty against him in many occasions. Simone his human, but she is well aware of the Darkyn world as she is the protector of the magic scroll that Korvel is sent to find. She has been loyal to her family and their quest to protect the scroll. I thought Viehl did a great job of showing Simone as resourceful and capable, while also showing her vulnerabilities especially where Korvel in concerned. It becomes a question of duty vs. love in the end and I liked the whole romantic part of the plot.


The overall plot itself, with the search for the magic scroll at the forefront was interesting and held my interest to the very end. This scroll was said to be the key to immortality. Whatever it contained or however it would be used would give a human eternal life. This has proven to be a good theme throughout literary history and Viehl uses it well here. I was mystified I'm sure like many readers will be until the author chooses to reveal the mysteries of the scroll and then I found there were even more questions than answers, which sets the scene for the overall series. I liked the plot a lot. It was edgy and got my attention quickly.


The supporting cast was a little hard for me to follow, given I had not read any of the other books. I had a hard time figuring out their motivations and why they acted the way they did. So I would probably recommend that readers at least familiarize themselves with the previous Darkyn books before reading this series. I plan to go back and catch up when I have the time, just so I can understand the characters a little better.

Nightborn is available NOW from your favorite bookseller.

I'm giving this one 4 out of five apples from my book bag! 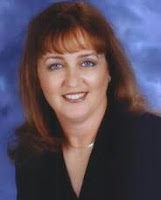 Lynn Viehl was raised and educated in South Florida, where she now lives with her two children. A United States Air Force veteran, she has medical experience from both military and civilian trauma centers.

Under her own name and pseudonyms, Lynn Viehl has published over twenty-five novels with ROC and NAL since her debut novel was published in January 2000.
Posted by justpeachy36 at 8:30 AM