WITH THIS RING, I THEE DEAD

Just as Jane Jameson's unlife seems to be stabilizing, fate sinks its fangs firmly into her butt. Despite her near-phobia of wedding planning, her no-frills nighttime nuptial to her sexy boyfriend, Gabriel, are coming along smoothly. That is, until she turns a fatally wounded teenage acquaintance, and the Council pronounces her responsible for the newborn vamp until he can control his thirst.

Jane's kitchen barely holds enough Faux Type O to satiate the cute teen's appetite and maintain Gabriel's jealous streak at a slow simmer. As if keeping her hyperactive childe from sucking the blood out of the entire neighborhood isn't enough to deal with, the persnickety ghost of Jane's newly deceased grandma Ruthie has declared war on the fanged residents of River Oak's. Suddenly choosing monogrammed cocktail napkins and a cake she can't even eat seems downright relaxing in comparison.

Tensions inside the house are growing... and outside, a sinister force is aiming a stake straight for the center of Gabriel's heart. Most brides just have to worry about choosing the right dress, but Jane fears that, at this rate, she'll never make it down the aisle for the wedding all nice girls dream of...


It's a rocky road to the altar for Jane Jameson in Molly Harper's fourth Jane Jameson novel, Nice Girls Don't Bite Their Neighbors. Harper brings a satisfying conclusion to the series, that is said to spawn a spin-off in the near future. Humor abounds as Jane plans every nice girls dream wedding. With deceased grandma Ruthie on the rampage, a newly turned vamp teenager, and someone out to get her fiancee, Jane's trip down the aisle may be at a stand still.

This is such a great series. If you like a lot of humor and laugh out loud moments in your reading this is the series for you. Nice Girls Don't Bite Their Neighbors is slated to be the final book in this hilarious series, but characters may make appearances in a new spin-off series from Harper out in the near future. I'm sad that the series is ending but happy that we may get a few glimpses of Jane and Gabriel in something new. Molly Harper has a real gift for making even the most dangerous situations have a lighter side. Her snarky sense of humor is evident in every chapter and her slap-stick comedy and zany attitude give this book a lot of personality.

Jane has only been a vampire for a little while and it's been a pretty hard adjustment. Over the course of the series Jane has come to terms with her new undead life. She's basically grown up a lot and that is even more evident in this latest installment to the series. I enjoy seeing a character grow and change and seeing Jane as a mentor and teacher to a new vampire teenager kind of feels like she's come full circle. I applaud the author for letting Jane remain a real person, even in death. She is a great character who readers are able to like and identify with. How many young women have struggled planning their weddings? The circumstances are certainly not the same, but the feelings are.

I loved the fact that Jane is having issues with her overbearing mother when it comes to wedding and her recently deceased grandmother over the vampires of Half Moon Hollow. There is a lot of tension here, but Harper uses it well and diffuses it to some extent with her trademark humor. The family dynamic of Jane's bunch is hilarious. Jane is zany away and when you add in the antics of an over zealous family, the comedy factor ramps up even more. I couldn't wait to see what Jane got into next. With the addition of Jamie, a teen who was fatally wounded, whom Jane turns, comes a bunch of twists and turns that turn the book in it's head. I think I liked every word!

Gabriel is just as ominous as usual in this book, and even shows his jealous streak. I think Harper was on the right track, by throwing a few wrenches in the works for Jane and Gabriel because Jane never does anything the simple way, so a wedding without a hitch, just wouldn't have worked. There is a villain after Gabriel and intent on using Jane to bring about his demise. He is not quite as bad as villains we have seen before in the series, but it works. This book is slightly less intensive than the others in the series and it all tied in together. Especially the fact that Jane and Gabriel can survive just about anything, including a teenage vampire child.

I recommend this one to paranormal romance readers, those who like a lot of comedy with their romance and readers who have fallen in love with Molly Harper's writing. This is a great conclusion to the series. Satisfying and well worth your time to read.


Nice Girls Don't Bite Their Neighbors is available NOW from your favorite bookseller. 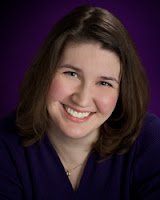 Molly Harper is the author of three previous novels in her acclaimed Jane Jameson vampire series: Nice Girls Don't Have Fangs, an RT Book Review Top Pick, Nice Girls Don't Date Dead Men, and Nice Girls Don't Live Forever, winner of the RT Reviewers' Choice Award. She is also the author of a new werewolf series - How to Flirt with a Naked Werewolf and The Art of Seducing a Naked Werewolf - as well as the RITA Award-nominated novel And One Last Thing. She lives in western Kentucky with her husband and children.
Posted by justpeachy36 at 12:49 PM