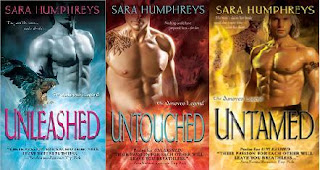 SHE SHOULD BE SEEN, BUT NEVER TOUCHED…

Kerry Smithson’s modeling career ensures that she will be admired from afar, which is essential since mere human touch sparks blinding pain and terrifying visions.

Dante Coltari is hired to protect Kerry from those who know who she is—or more importantly what she is—and want her dead because of it. Nothing could have prepared him for the challenge of keeping her safe. But, strangely, his lightest touch brings her exquisite pleasure rather than pain, and Dante and Kerry have an otherwordly connection that might just pull them through


Riddle me this, riddle me that! Readers will enjoy figuring out who the "punisher" is in Sara Humphreys's latest book in the Amoveo series, Untouched. Untouched is book two in the series, which introduced readers to 10 shape-shifting clans living secretly among humans. Humphreys writes with an elegant, smooth style that draws the reader in and quickly allows them to become emotionally invested in the story and the characters. If you haven't tried this series yet, you're missing out on a great new voice in the paranormal romance sub-genre.


I love stories about shifters. Wolf shifters are definitely my favorite, but Sara Humphreys may make me change my mind. The Amoveo series features 10 different clans of shifters and I can't wait to read books about them all. In the first book in the series, Unleashed the hero was a shifter from the eagle clan. Now in Untouched, Dante is a member of the fox clan. After reading the first book I knew there was a lot of potential with this series. It could either be really great or fall flat. Untouched was actually even better than the first book for a several reasons.


One of the reasons I liked it better was the attitude and demeanor of the main characters Dante and Kerry. Dante is quite different from Malcolm in the first book. Malcolm was more reserved and had a more quiet manner. Dante is very playful and his sarcastic wit had me smiling on more than one occasion. He was just more relaxed and open to things. The banter between Dante and Kerry, who also has a dry sense of humor was very enjoyable to read. I liked Dante when he was introduced in the first book. He has a deep sense of loyalty and the reader can sense that no matter what Kerry could throw at him, he could handle it.

Kerry is such a great character. She has been forced to lead a very solitary life and she never really knew why. She has a fear of touch that goes far beyond being a germophobe. Touch actually brings her physical pain, as well as, emotional turmoil since it gives her visions of a person's darkest thoughts and actions. Much like Samantha in the first book Kerry was unaware of the reasons for this phenomenon. When she learns that she is a half-breed, part human, part Amoveo, things start to fall in place a little better for her. Dante's touch doesn't hurt like other peoples, because he is her life-mate. Humphreys writes her as a young woman who has been lonely all her life until she meets someone that was destined to be her soul-mate. But their relationship isn't easy.


The Amoveo are made up of two factions, including the Purists who are against any mixing of the bloodlines. Kerry is abomination in their eyes and they are set on destroying her because of it. Dante is dead set on protecting her and the race to stay alive is on. The "punisher" was a mystery throughout the book. He stalked Kerry, hunted her almost. He was always in the back of her world, watching and waiting for a chance to strike. I was completely shocked to find out who it was in the end. What a great villain! Humphrey's gives the reader just enough to make them think they know who it is and then pulls the rug out. I loved the suspense of it!


This is a great paranormal series that readers of the sub-genre will not want to miss! I can't wait to learn even more about the world that Sara Humphreys has created. I'm interested in all the clans and how they interact and work together. I hope that Humphreys reveals more about this in future books. I understand that William's story comes out later this year and I'm excited to read it as well. If you haven't read the first book, it's time you did. Book two can be read as a stand alone, but why would you want to? (wink)!

Untouched is available NOW from your favorite bookseller. 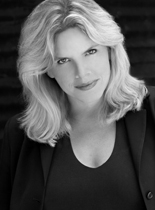 Sara is a graduate of Marist College, with a B.A. in English Literature & Theater. Her initial path after college was a professional actress. Some of her television credits include, A & E, Biography, Guiding Light, Another World, As the World Turns and Rescue Me. For the past several years Sara has been a professional public speaker and speaker trainer. Her career began with Monster's Making It Count programs, speaking in high schools and colleges around the United States to thousands of students. For the past several years Sara has worked with the College of Westchester in New York as the director of high school and community relations.


Sara has been a lover of both the paranormal and romance novels for years. Her science fiction/fantasy/romance obsession began years ago with the TV series Star Trek and an enormous crush on Captain Kirk. That sci-fi obsession soon evolved into the love of vampires, ghosts, werewolves, and of course shapeshifters. Sara is married to her college sweetheart, Will. They live in Bronxville, New York, with their four boys, two dopey dogs, and an extremely loud bird. Life is busy but never dull.

I'm humbled. Thank you for this beautifully written review.