Synopsis:
A born warrior, archangel Michael is dedicated to the Fallen’s survival. But only one woman understands the seductive hunger that he cannot forsake.
There comes a time in every angel’s life . . .

Every little girl imagines, now and then, that she’s a princess held captive in a tower. But Victoria Bellona is almost twenty-five. And that whole fairy-tale scenario? That’s her real life. The drop-dead gorgeous man who rescues her is no Prince Charming. He’s the gruff archangel Michael, and he insists that Tory is the Fallen’s only hope for ending Uriel’s vicious rule. She insists he’s crazy

According to the prophecy, Michael must marry this frustrating, fascinating creature, bed her, and drink her blood. But their fate is a double-edged sword. If they give in to their urgently growing desires, Tory will die in battle. If they refuse, she will die anyway, and with her, all of mankind. Michael is determined to find another solution when a traitorous kidnapper forces him into a deadly confrontation. Even if he can save Tory from Uriel’s ruthless clutches, will they ever really be together? Or is her fatal destiny—and the world’s—written in stone?

Warrior is the third book in Kristina Douglas' Fallen series. This is a series based on several different resources about angels and the fallen in particular. Douglas brings readers a very interesting and fresh look into Lucifer's band of angels who supposedly fell in love with human women. It's an original premise with lots of potential. Douglas peoples her world with tough, rugged angels who are nothing like the halo wearing angels most readers are used to. This book continues a developing series that is finding a bigger readership all the time.


Reading a book like Warrior is always interesting for a Christian reader. It's interesting to me when authors use Biblical themes and ideas and put their own spin on them to create good, well written fiction. The key to remember is that is not meant to be literal... it's fiction. A good story and not supposed to be factual. So if you are a Christian reader, don't get uptight about it, read with an open mind and I think you'll really enjoy this series and this book.


Kristina Douglas does a fantastic job with world building in this series. Readers who are unfamiliar with the previous books in the series may be a little lost with Warrior, but they'll catch on quickly. The fallen are angels that that God cast out of heaven for various reasons. For this series in particular the angels that are fallen are angels that fell in love with human woman, who are being hunted by the Nephlim... warriors sent by the last archangel Uriel to hunt down the fallen. The fallen make a deal with Uriel to lead souls to their place in the afterlife in return for an uneasy peace. The fallen need the blood of a mate to survive, but they are not vampires. It's a very interesting world that has tons of potential.


In Warrior the archangel Michael is the champion of the fallen. He is determined to protect them in any way he can. When he finds out about a prophecy that could save the fallen from Uriel's power hungry rule, he jumps at the chance to fulfill it. What he doesn't take into account is the fact that Tory would affect him in such a way. She is in every sense his mate. He is destined to marry her but having the perfect life isn't in the cards. She is destined to die whether the prophecy comes true or not. It's up to Michael to figure out a way to save her and the fallen. I loved the whole sacrificial love idea in this book. It was a compelling storyline and the characters were endearing enough to pull if off.


Michael is strong and tough. He isn't your grandma's angel who sits on a cloud playing harp all day. He is a warrior in every sense of the word. I liked the idea that Douglas made her angel's sexy and dark, exactly what I would expect in a fallen angel. He is brooding and very deep. Readers will fall for him instantly, for his sense of loyalty and duty and for his protective nature. He was just a great character. Tory on the other hand was a little harder for me to identify with. I wanted someone who could really stand up to Michael and do him justice and she just didn't do that for me as a reader. She was good, but I guess I just wanted a little more for him. I liked the whole rescue the damsel in distress scenario of how Michael and Tory met, that was fun.


This is a good series and a good book. I recommend it to paranormal romance fans and lovers of regular romance as well. It's a well written book about angels taken from Biblical scripture, the lost books of the Bible and Jewish folklore. Mixed altogether with the authors twist and you have a very interesting take on the fallen.

Warrior is available NOW from your favorite bookseller. 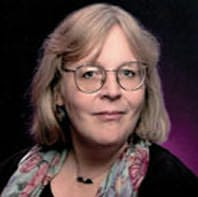 Anne Kristine Stuart was born on May 2, 1948 in Philadelphia, Pennsylvania, U.S.A., just after World War II to overeducated parents and grew up in Princeton, New Jersey (back in the days when girls didn't go to Princeton). Her childhood was classically dysfunctional, but she managed to survive and even thrive, helped by her love of story. She read voraciously and began to write novels in fifth grade, usually involving technically impossible love scenes (back then fifth graders were innocent).

Anne lives on 20 acres in a town in northern Vermont with her magnificent husband of more than 25 years, Richard Ohlrogge, two wonderful teenage children (a boy and a girl), four cats, a springer spaniel, a satellite dish, seven televisions, six VCRs, a DVD player, six CD players, a Husqvarna sewing machine and serger. And she loves them all. Not to mention the household's five computers.
Posted by justpeachy36 at 9:30 AM